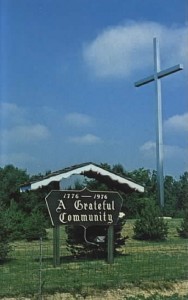 Americans United for Separation of Church and State (AU) has formally asked (pdf) to the city of Frankenmuth, Michigan to remove a 55-foot tall Christian cross from a public park. The cross was erected in a 1976 ceremony attended by then-Mayor of Frankenmuth Elmer Simon, who, at the dedication ceremony, said that “The simple cross of Christ assures us that life does not end with death. From our local heritage, this Christian symbol suggests that we are also a community under Christ.” More recently, the City has referred to the cross as “a tribute to the religious commitment of the Frankenmuth community.” AU points out that the display of a Christian cross in a taxpayer-supported public park is an unlawful endorsement of Christianity. The First Amendment to the U.S. Constitution prohibits government from promoting one religion above all others, and from promoting religion over non-religion, the group says, citing legal precedent for the symbol’s removal. AU suggested the City remove the cross to private land, and wrote, “Failure to remove the cross will expose the City to a significant risk of litigation.” AU requested a response from the City within 30 days. Frankenmuth is a city of about 5,000 nicknamed “Little Bavaria” that trades on its Bavarian-themed, timber-framed architecture, shops, breweries and German culture.