Billboards have just gone up across Grand Junction featuring Obama’s iconic campaign logo. At first glance — and that’s about all you get when driving by — all you see is the logo and it looks like the ads are pro-Obama. But if you look a split second longer, you see they are anti-Obama. The ads show someone in a pair of jeans, pulling out their empty pockets. Large wording over the photo says, “Still hoping for change?” The bottom of the board says has the website, “compasscolorado.org.”

Compass Colorado is a new conservative 501(c)4 political attack group formed in September, 2011 and headed by career Colorado Republican operative Tyler Quill “T.Q.” Houlton, who was Communications Director for Republican former Rep. Tom Tancredo. Rep. Tancredo gained fame for a speech he gave on February 4, 2010, to National Tea Party Movement Convention in which he said that Barack Obama won the presidency because of “people who could not even spell the word ’vote’ or say it in English.” He then proposed people undergo “a civics literacy test” as a prerequisite to voting.

Houlton also worked for Scott McInnis’ failed campaign for governor of Colorado. That campaign imploded after it was revealed that McInnis had plagiarized an extensive essay about water law that a nonprofit group had paid him to write. McInnis blamed the plagiarism on an elderly research assistant and refunded the $300,000 the organization had paid him.

Not much has been heard from McInnes since. 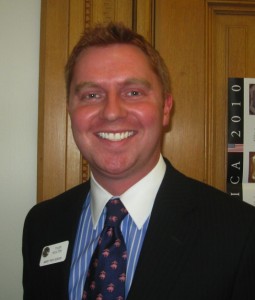 Like other conservative attack groups, Compass Colorado doesn’t reveal its donors, so we don’t know who is really behind the ads they are running. Compass Colorado’s first target was Democratic Colorado State Senator Evie Hudak of Westminster, Colorado, a former teacher and member of the Colorado Board of Education. Last election season, Compass Colorado took out $60,000 worth of TV ads to attack Sen. Hudak over her support for Proposition 103, a ballot measure that sought to increase the state income tax to help fund K-12 education. (K-12 education is now suffering financially to such an extent in Colorado that school districts across the state are moving to 4-day school weeks.) Compass Colorado also was behind robocalls attacking Proposition 103. Houlton narrated the robocalls, which went out to approximately 100,000 Colorado voters.

The domain name “CompassColorado.org” is registered to Domains by Proxy in Scottsdale, Arizona, — an entity that exists purely for the purpose of keeping domain registrations secret.  Why is Compass Colorado so secretive about their funders and domain name registration? We won’t find out, unless Tyler Houlton and his Republican funders start believing in transparency and informing voters about who is really doing the attacking.