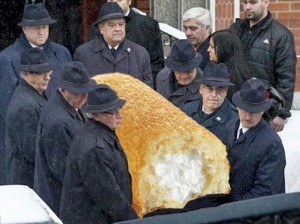 Hostess Brands publicly blamed its workers’ union for forcing it out of business, but now Hostess CEO Gregory Rayburn has admitted to the Wall Street Journal that the company had been quietly ripping off its own workers. Hostess took money out of workers’ paychecks that was supposed to go towards their pensions and put it towards company operations instead, Rayburn admitted. Rayburn said the company was not under his management when those diversions occurred. During its dispute with the union, Hostess pressured employees to take another pay cut ostensibly due to financial difficulties, but in November, 2012 — while the company was undergoing bankruptcy filing — Hostess  asked a judge to allow it pay out $1.8 million in bonuses to 19 of its top executives. The judge approved the bonuses, but did not, however, include any bonus pay for Rayburn, who was already being paid $125,000 a month, nor did the company seek any bonuses for its factory or other non-executive-level workers. The story that the union was responsible for tanking the Twinkie maker, then, is a myth designed to cast labor unions in a bad light.