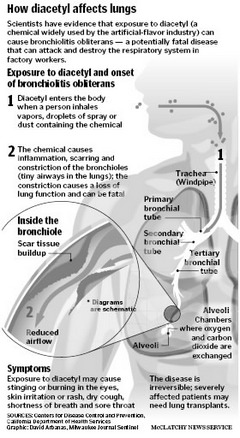 A chemical flavoring used to create that delicious, buttery flavor in microwave popcorn, when heated, can cause a life-threatening, irreversible obstructive lung disease called bronchiolitis obliterates. The chemical, called diacetyl, was first found make popcorn manufacturing workers sick in 1985, after two workers employed in a factory where the flavoring was used developed a rare lung disease. The National Institute of Occupational Safety and Health (NIOSH), tested the air in the employees’ workplace, found a high concentration of diacetyl, and confirmed a link between workers’ exposure to the chemical and their reduced lung function. Since then, hundreds of workers have reported becoming sick after working around the chemical. According to NIOSH, diacetyl is used extensively in the flavoring and food manufacturing industries. Diacetyl doesn’t just affect factory workers, either. Wayne Watson of Denver, Colorado, ate two bags of microwave popcorn every day for ten years and developed the lung disease now known as “popcorn lung.” In September, 2012, he was awarded $7.2 million in a lawsuit against Gilster-Mary Lee Corporation, which made the popcorn, and the Kroger and Dillon Companies, the grocery store chains that sold it. In his suit, Watson pointed out that neither the manufacturer nor the grocery stores warned customers that diacetyl — also recently linked to Alzheimer’s disease — was dangerous. In December, 2012, Sensient, a flavoring company in Indianapolis, Indiana, agreed to pay a fine for violating Indiana OSHA workplace standards for use of diacetyl. The company also agreed to reduce its use of the chemical. In 2004, a jury awarded another couple, Eric and Cassandra Peoples of Joplin, Missouri, a total of $20 million for health injuries they incurred due to workplace exposure to the chemical. So far, food manufacturers have paid out over $100 million in damages to workers who were exposed to the chemical and got sick. Despite this, FDA still lists the chemical as safe on its website.

Resource: U.S. Centers for Disease Control 2011 Review and Recommendation for Standard for Use of Diacetyl  (pdf)