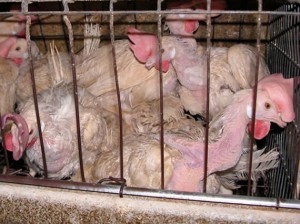 The Humane Society of the United States (HSUS) is sounding alarm bells about a bill introduced in New Hampshire’s House of Representatives that requires people who photograph or make video recordings of cruelty against livestock to report it to police within 24 hours and turn over their unedited video or photos to authorities. So what’s wrong with that? And why does the HSUS oppose it? After all, it sounds like it’s aimed at exposing animal abuse, right? Nope. It’s a particularly tricky form of an industry-crafted “Ag-Gag” bill meant to stifle reporting on animal cruelty in commercial livestock operations. How? When whistleblowers expose cruelty at commercial animal enterprises, a common excuse put forth by business owners is that the abuse was a one-off occurrence or a single event perpetrated by a rogue employee who has, of course, since been fired. People working to expose animal abuse in big agribusiness enterprises have learned that they must document repeated instances of cruelty in order to make a solid case against the company that will hold up in court. Such high-quality evidence is animal advocates’ only leverage to try and stop to the abuse. If people are required to turn over a video recording of a single instance of abuse the same day it was taken, it would make it virtually impossible to document a pattern of abuse to the extent necessary to make a tight enough case to stop it. The bill also doesn’t mention people who witness animal abuse but don’t record it photographically.  Most big ag companies prohibit employees from videotaping or photographing their operations, rendering useless a huge pool of potential witnesses to animal abuse who are unable to document it.  The food industry has also been working to pass laws that prohibit anyone from photographing their operations without express permission. New Hampshire’s proposed law also only pertains to livestock, without acknowledging other operations notorious for animal abuse, like puppy mills or experimental laboratories that use animals. The law also doesn’t deal with abuse of household pets, either. Even the 24-hour reporting requirement seems suspect, like it was designed to target undercover reporters. After all, teachers, doctors, nurses and daycare workers in Texas who suspect child abuse are required by law to report it to authorities within 48 hours.  That makes New Hampshire’s proposed bill look suspiciously overzealous to animal advocates. New Hampshire’s bill was so masterfully crafted that even some of the bill’s co-sponsors, several of whom have reportedly backed other truly effective anti-cruelty laws, were snookered into believing it was a good idea.