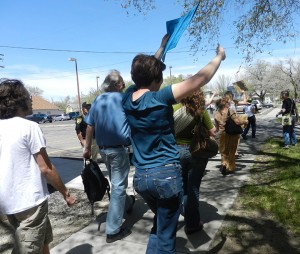 The fortunes of the Grand Junction Colorado Area Chamber of Commerce are sinking this week alongside those of embattled councilman-elect Rick Brainard, an executive at West Star Aviation in Grand Junction, who faces criminal charges for allegedly assaulting his girlfriend during a domestic altercation April 6. Grand Junction Police arrested and charged Mr. Brainard just four days after he won election to the Grand Junction City Council. Appalled citizens have been marching, chanting, holding rallies and organizing phone banks to protest Mr. Brainard assuming his seat on Council. This week outraged citizens picketed the G.J. Chamber, which continues to stand steadfastly behind Mr. Brainard. Just days ago, Mr. Brainard resigned from the Chamber’s board, but the Chamber still backs him. Adding to the Chamber’s woes, this week, the City of Grand Junction voted to yank its $6,000 membership in the Chamber, saying the Chamber has changed from an economic development organization into an overtly political group. As if losing the City’s lucrative membership and being targeted with loud protests by Grand Junction citizens wasn’t enough, this week thieves targeted the Chamber stealing a number of copper backflow devices said to be valued at thousands of dollars. To top it all off, an alternative Chamber of Commerce announced its debut this week in town: the Western Colorado Latino Chamber of Commerce, with dues that are a fraction of the GJ Chamber’s dues, making the Latino Chamber far more accessible to smaller businesses.

Additional coverage: The Daily Sentinel publishes audio of calls from citizens to City  Council over the Brainard issue