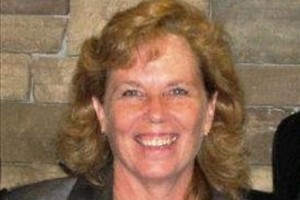 Bonnie Peterson is said to be the person responsible for inviting Casey to speak, without informing hosts or sponsors of the Energy Expo.

Neither Colorado Mesa University President Tim Foster nor Teresa Coons, Executive Director of the John McConnell Math and Science Center, were consulted or informed about the controversial speaker that members of small Expo subcommittee quietly selected to keynote this year’s Club 20 Energy Expo in Grand Junction.

John L. Casey, slated to give the keynote talk at this Friday’s Energy Expo, has alarmed citizens with his extreme fringe views.

In videos of his talks publicly available online, Casey tells audiences that man-made climate change is a scientific fraud perpetrated by the U.S. Government and the United Nations. He says global warming has ended, that in 2007 the sun entered a “hibernation” phase and now we have to prepare for a coming ice age that will devastate our food supply. In a November, 2014 video, Casey predicts dire food shortages worldwide. He urges people to lay in a full year’s supply of food to cope with it, telling people to ignore the expiration dates printed on food containers. He predicts that the diminished food supply will lead to massive social panic and tells his audiences that they need to get ready to defend their food stores from rioters, murderers and thieves. His mission is to “get the message out” about the purported coming devastation. 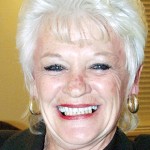 George Rossman, one of the three committee members responsible for inviting Casey to speak

The Tea Party News Network bills Casey as a “climatologist,” and though he has made a name for himself speaking and writing about climate science, he has no degrees in climatology, nor has he ever published any peer-reviewed research on the topic. He is a favorite speaker of Florida tea party groups, and available videos invariably show him speaking before far-right conservative audiences and talk show hosts.

Foster and Coons are both quick say that their organizations have not contributed any money to the Energy Expo, but neither has stepped up to condemn the invitation of Casey.

Casey was selected to speak by a three person subset the committee that organized the Energy Expo. Members of this committee reportedly are Bonnie Peterson, former chair of the Grand Junction Area Chamber of Commerce and now Executive Director of the Associated Governments of Northwest Colorado, Kathy Hall, a former lobbyist for the Colorado Oil and Gas Association and George Rossman (who is a woman), a professional event organizer. None of these committee members informed the Expo’s hosts or sponsors about their choices of speakers prior to finalizing the schedule.

There are only two possibilities these women could claim that led to selection of this embarassing speaker: 1) They were fully aware of Casey’s fringe views and lack of credentials, and invited him anyway, or 2) they didn’t properly vet Casey prior to hiring him to keynote the event.

Neither scenario is acceptable.

If the first scenario is true, then these three acting alone pulled the Energy Expo into the tea party political fringe zone without informing the hosts or sponsors whose organizations’ names appear on Expo promotional materials about their choices.

If the second scenario is true, they neglected a duty to vet Mr. Casey by checking out his previous talks, and should be held accountable for this mistake and the shame it has brought to the event.

The event’s biosketch of Casey, whichi says up front that he’s been called a scam artist and a fraud, would seem to indicate scenario #1 is the case, and that Peterson, Hall and Rossman knew exactly what they were doing, and what they were bringing to the Expo by inviting Casey. 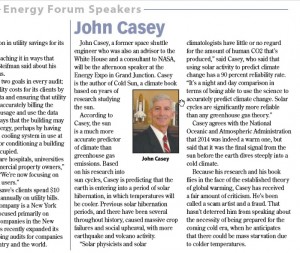 Event hosts Colorado Mountain College, CMU and the Math and Science Center, may not have contributed any money to the event, but they have put their credibility as respected educational institutions on the line. By trusting the Expo organizers, they’ve shot themselves in the foot. In exchange for lending their names to the event, the organizers have dragged them into the mud by purposely choosing a wacky, fringe tea party speaker who trades on generating fear to make a name for himself.