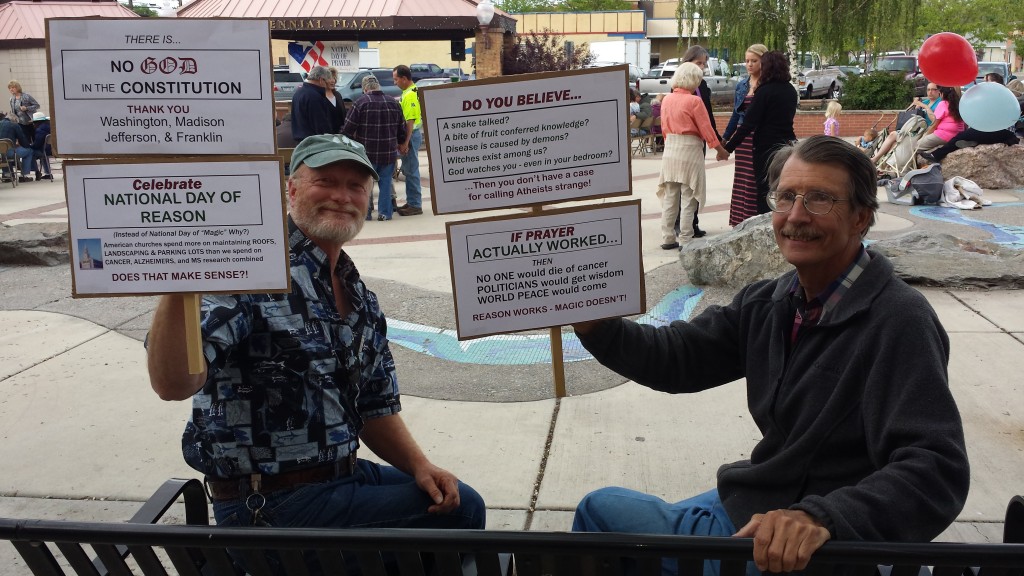 Smiling atheists protest National Day of Prayer in Centennial Plaza, adjacent to Montrose City Hall, while religious people hold hands and bow their heads in prayer in the background.

For the first time in history, secular citizens in Montrose, Colorado turned out to protest the town’s “National Day of Prayer” event.

Each year, Montrose holds a public prayer event to commemorate the “National Day of Prayer.” This year’s event was at 5:30 – 7:30 p.m. on Thursday, May 7, 2015 at Centennial Plaza at South First Street and Uncompahgre Ave. The plaza is adjacent to the Montrose City Hall.

As people gathered in circles to hold hands, bow their heads and pray to a god or gods, secular citizens sat peacefully nearby, holding signs that said,

A bit of fruit conferred knowledge?

Disease is caused by demons?

Witches exist among us?

God watches you, even in your bedroom?

Then you don’t have a case for calling Atheists “strange!”

If prayer actually worked, then

NO ONE would die of cancer

POLITICIANS would get wisdom

There is no GOD in the Constitution. Thank you Washington, Madison, Jefferson and Franklin

On April 15, 2010,U.S. District Judge Barbara Crabb ruled that the statute establishing the National Day of Prayer was unconstitutional, saying it is “an inherently religious exercise that serves no secular function.” However, on April 14, 2011 a three judge panel of the Seventh Circuit Court of Appeals unanimously overturned Crabb’s decision on a technicality, saying the party bringing the lawsuit did not have standing to bring the suit.

In response to the Day of Prayer, which many people continue to believe is unconstitutional, secular citizens declared the first Thursday in May (the same day as the National Day of Prayer) as the National Day of Reason. The holiday is meant to raise public awareness about the threat posed by government intrusion into the private sphere of worship, and to inspire the secular community to become more visible in the U.S.

On May 7, 2015, the secular community became a lot more visible in Montrose, Colorado!