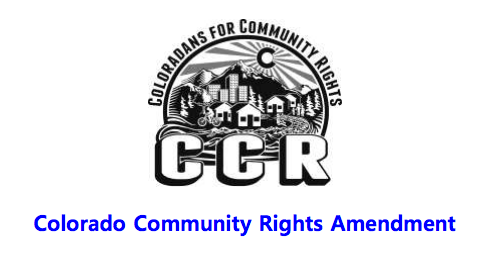 A Community Rights amendment doesn’t ban anything. Instead, the measure establishes that communities in Colorado have a definitive right to local self-government. That is, the new law would give people, not corporations, the dominant authority to decide how to best protect health, safety and welfare in their own communities and surrounding natural environments. Basically, the measure would allow communities to decide, free from corporate or state interference, whether to allow corporate projects that could negatively impact their safe and healthy environments.

What does this measure mean to citizens on the western slope?

The Community Rights Amendment would, for example, give Mesa County residents living around Alanco’s stinky Deer Creek frackwater ponds the right to disallow this land use in their area. It would also give Paonia residents the right to keep drilling and fracking activities away from their schools, residential areas and organic farming districts. Corporations and their trade groups could no longer sue communities over decisions to keep dangerous or noxious industrial activities out of their area. The amendment would also prevent corporations from suing communities that vote to enact living wages, or ban GMOs (genetically modified organisms), for example.

On August 17, CCR submitted the official ballot language for the 2016 Colorado Community Rights Amendment to the Colorado Legislative Council. The ballot measure is very short, only about 200 words. After the ballot language is approved, CCR will organize a state-wide campaign to gather the number of signatures necessary to qualify the measure for the November 2016 statewide ballot.

CCR tried to get a Community Rights measure on the 2014 statewide ballot, but legal challenges by corporations opposed to the measure succeeded in delaying the signature-gathering phase of the effort until it was too late. This time, CCR has started work early enough that they will have a better shot at getting the measure on the ballot and passing it.