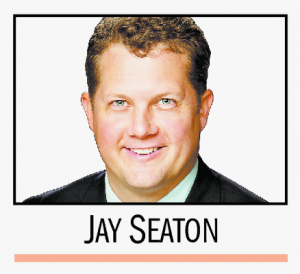 The confrontation came about after Scott’s committee failed to hold a hearing on SB-40 (pdf), a bill to update Colorado’s Open Records Act (CORA), also known as a “Sunshine Law.” SB-40 would make it easier for the public to access and analyze government documents, in particular computerized records. If a digital document exists in a state or local government office in a searchable format, the new law would require the government deliver it in searchable format to members of the public who request copies of it under CORA. If passed, the bill would save citizens and journalists a huge amount of time searching through documents for specific information.

Newspapers often use CORA requests to obtain documents about lawmakers’ activities, but many legislators don’t like the idea of making such information more accessible to constituents and journalists.

Ray Scott is apparently one of those legislators.

SB-40 was to be heard Monday, February 6 by the Senate Veterans and Military Affairs (SVMA) Committee, chaired by none other than our very own Senator Ray Scott. This committee is also known as a “Kill Committee,” where legislators send bills they don’t like to make sure they die. Ray Scott did his job and duly canceled the hearing on SB-40 indefinitely without offering any explanation or new hearing date, likely rendering the bill dead for this year. He did the same thing for a similar CORA bill that came before his committee last year, too.

The Sentinel tried to contact Scott to ask why he canceled the hearing on SB-40, but Scott did not respond.

The Sentinel then published an editorial February 8 titled “Better Open Records” asking Scott to reschedule SB-40, give it a fair hearing and advance it out of his committee to the full senate for a vote.

Ray Scott flames the Daily Sentinel in a sophomoric tweet

In response, Seaton wrote an editorial February 12 titled “A False Character Assassination That Can’t Go Unchallenged,” in which he threw down the gauntlet.

Seaton said he takes very seriously the Sentinel’s duty to watchdog government, uncover the facts and report them to the public in a truthful, dispassionate manner. Seaton pointed out that credibility is his newspaper’s stock-in-trade, and that Scott was applying a proven method to avoid accountability, specifically undermining the credibility of the Sentinel rather than addressing the issue at hand. Seaton also charged Scott with knowingly making a false statement with the intent of diminishing the paper’s credibility — a key fact that must be established in order to prevail in a defamation suit.

“When Sen. Scott asserts that The Daily Sentinel is ‘fake news,’… he intends to diminish The Sentinel as a purveyor of reliable information…[T]here is a difference between criticism of a news story, editorial stance or perceived bias and what Sen. Scott has done. His tweet is patently, provably false.”

How did Scott respond?

We’ll see if the Sentinel follows through on its threat to sue Scott. If it does, it will be an extremely rare — maybe even historic — case of a newspaper suing an individual. Most of the time, it’s the opposite; a newspaper prints something a legislator or individual finds objectionable, and the individual sues the paper for defamation.

These days even our highest-level elected officials have been using charges of “fake news” almost every day as a ploy to avoid discussing facts and having to justify what they are doing. A defamation lawsuit against Scott, if the Sentinel files it, could put legislators across the country on notice that they can no longer flippantly throw out the term “fake news” to try and harm a news outlet’s reputation. Such a lawsuit could be groundbreaking, and extremely important to the future of news coverage across the country, especially now, in the Trump era.

Maybe Grand Junction’s hometown newspaper will rise to national prominence and make history by drawing a line in the sand against elected officials throwing around fake charges of “fake news.”