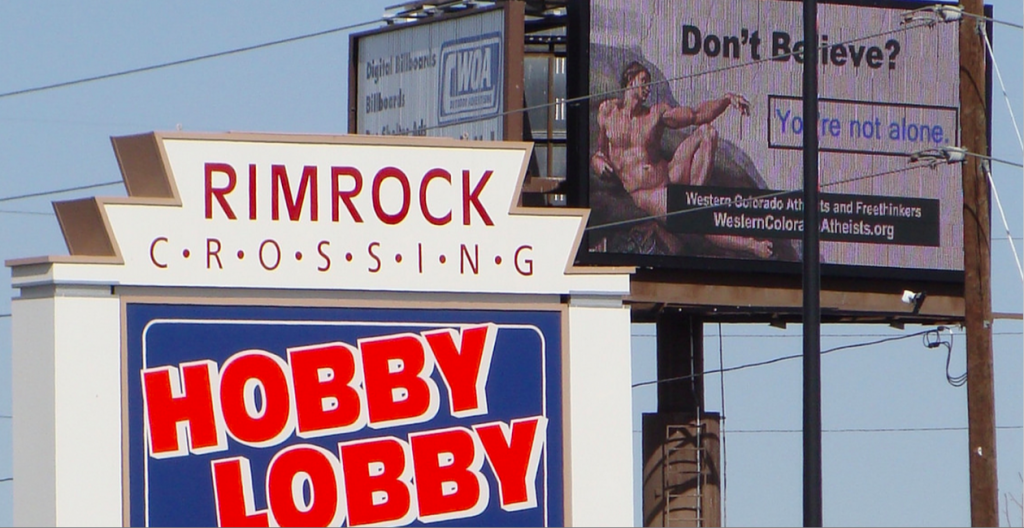 WCAF’s billboard graces I-70 Business Loop right in front of Hobby Lobby, which sued the federal government to deny its female employees’ coverage for contraception due to the company owners’ personal religious beliefs. (Photo Credit: JT)

A new digital billboard is up on I-70 Business Loop in Grand Junction, Colorado, supports people who don’t believe in God by reassuring them that they’re not alone. The board was put up by Western Colorado Atheists and Freethinkers (WCAF), the area’s first secular group. WCAF was founded in February, 2007, to give western Colorado atheists voice in a part of Colorado where religiosity has historically dominated the culture and people were afraid to admit they didn’t believe in God. 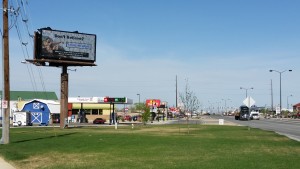 WCAF’s billboard on I-70 Business Loop, just west of Chick-Fil-A. It reads, “Don’t Believe? You’re not alone,” and lists WCAF’s website at WesternColoradoAtheists.org.

“If you had told me 25 years ago a day would come in Grand Junction when a big, glowing atheist billboard would be up on the main highway into town on Easter weekend, I never would have believed it,” said Anne Landman, Board Member at Large of WCAF. “But times have really changed here. We’ve had a huge amount of support for this board. It’s all right now to be an open atheist in western Colorado, and that’s what WCAF is saying with this board. It’s fine not to believe in God. Lots of people don’t, and if you don’t, you’re joining a fast-growing number of people in the U.S. who don’t.”

WCAF meets regularly twice a month and invites people to visit its website at WesternColoradoAtheists.org for information on meeting times and locations.