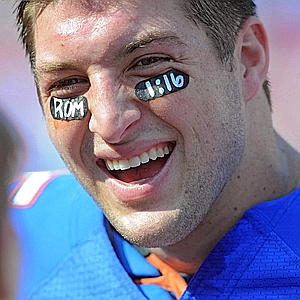 Even some Coloradans who lack the sports gene are relieved to hear that the Denver Broncos signed Peyton Manning as their new star quarterback. This could mean Tim Tebow is on his way out. For people who aren’t fans of overt proselytizing — whether they follow football or not — that is a good thing.

Religiosity is doubtless important to lots of football stars. That’s fine, but none of them have ever promoted their religion as overtly as Tebow. While in college, Tebow literally shoved his religion into viewers’ faces by writing Bible verse references in the black spots painted under his eyes, a practice that the National Collegiate Athletic Association (NCAA) then had to ban, in a rule dubbed  “the Tebow rule.” In 2010, he pushed his luck further, appearing in a $2.5 million anti-abortion ad that aired during the Super Bowl, paid for by Focus on the Family.

Then there was “Tebowing,” his trademark prayer-bow, which he was always careful to do in front of the crowds that came to watch the games. He tried to portray this as a humble act, but had he really been humble, he could just have easily dropped to his knee in prayer in the locker room before he went out in front of the crowds. Instead he exploited the opportunity to show everyone what a super-religious guy he is. Tebow even told one reporter that he considered his rise to fame a “great opportunity to get a public platform” for  his public prayer. Indeed, some news reporters labeled him a football “phenomenon,” and then spoke more about his public prayer than how well he played.

Tebow’s overt hyper-religiosity also sometimes drew ridicule to both him and the Broncos. In October, 2011, Detroit Lions linebacker Stephen Tullock knelt in mock-prayer after sacking Tebow in a game where the Lions trounced the Broncos 45-10. Saturday Night Live even did a skit ridiculing Tebow. In it, Jesus appears in the Denver Broncos’ locker room to have a talk with the team. Jesus says he can’t always be there to rescue to the team in the fourth quarter, and says he needs their help. He tells Tebow, “I could throw better, and I’m 2,010 years old!” He says the team “should be thanking your kicker…Matt Prader.” Jesus then turns to Prader and says, “I pray to you, brother.” Prader replies, “Wow, I didn’t know you prayed to me!” Jesus then looks directly at Tebow and says “That’s because I’m not in everyone’s face about it.”

When we ask evangelical Christians to please not  foist their religion on others, they complain they are the victims of a “war on Christianity.” What they don’t get is that when Americans who belong to different religions — or no religion — have messages promoting Christianity foisted on them in public venues like shopping malls, sporting venues or in legislative hearing rooms, it starts to feel like the war is on them, for believing in something other than Christianity. It’s a turn-off, and so, for many people, was Tebow’s public religious behavior.

Tim Tebow deserves credit for avoiding harmful behaviors that so often turn pro-football players into front page news, like drinking, dog-fighting and domestic violence. But Tebow turned himself into front-page news for other reasons which not everyone view as positive. His penchant for using his fame to blatantly promote his Christianity no doubt made some football fans, and maybe even his bosses, uncomfortable. After all, it’s a simple concept to grasp that people go to football games to have fun and not to get preached to. For that, there’s church.

So now we get to say with great relief, “Goodbye, Tim Tebow, and the best of luck to you.” Maybe if you’re lucky the Church will start a football team someday. Now wouldn’t THAT be perfect.