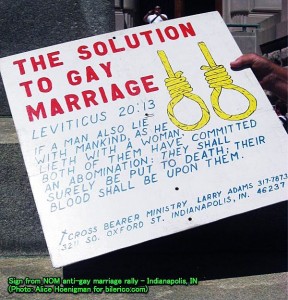 Previously-secret internal documents released during the course of a lawsuit in Maine reveal the National Organization for Marriage had a PR strategy to turn blacks against gays in an effort to stir up opposition to gay marriage. NOM, a right-wing, anti-gay group founded in 2007 to fight efforts to legalize same-sex marriage, works to defeat marriage equality laws in states where they are advancing.

A confidential 2008-2009 report to NOM’s Board of Directors states,
“The strategic goal of this project is to drive a wedge between gays and blacks—two key Democratic constituencies. Find, equip, energize and connect African American spokespeople for marriage, develop a media campaign around their objections to gay marriage as a civil right; provoke the gay marriage base into responding by denouncing these spokesmen and women as bigots…Find attractive young black Democrats to challenge white gay marriage advocates electorally…”
Lifting directly from the tobacco industry strategy, one NOM’s document states (on page 23) “Identify and nurture a worldwide community of highly credentialed intellectuals and professional scholars, physicians, psychiatrists, social workers and writers to credential our concerns and to interrupt the silencing that takes place…around gay marriage and related family matters… Expert Witness Project 2010 Budget: $50,000.”

NOM released a statement defending its strategies of pitting minorities against each other, saying “Gay marriage is not a civil right, and we will continue to point this out in written materials such as those released in Maine. We proudly bring together people of different races, creeds and colors to fight for our most fundamental institution: marriage.”