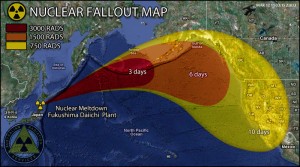 At the one-year anniversary of the Fukushima Daiichi nuclear powerplant disaster, some American news outlets are still minimizing the seriousness of the event, if they even cover it at all. A March 1, 2012 New York Times article titled “Sizing Up the Health Impacts a Year After Fukushima,” reports that “experts” have concluded the “health impacts from the radioactive materials released in the Fukushima Daiichi meltdowns will probably be too small to be easily measured.” There was no mention of a  70-page study (pdf) issued by the Union of Concerned Scientists on U.S. nuclear plant safety titled “Living on Borrowed Time” that reported on 15 near-misses that occurred at U.S. nuclear power plants in 2011. Many of those events happened because reactor owners either ignored known safety problems or took inadequate steps to prevent them. Also, in a February 25, 2012 articled titled “Fukushima — Worse than Chernobyl,” Janette Sherman and Joseph Mangano — she a specialist in internal medicine and toxicology with an emphasis on nuclear radiation and he the executive director of the Radiation and Public Health Project — make the case that the U.S. media has engaged in a “selective blackout” on news following up on the Fukushima Daiichi nuclear power plant disaster.  They conclude that not enough health and environmental data are being gathered after the Fukushima disaster to allow measurements of disease levels occurring as a result of the event. The two previously reported on a significant increase in infant deaths they noticed in the Pacific northwest following the Fukushima disaster. Based on their observations of the health and environmental impacts of Fukushima, Sherman and Mangano advocate ending all deaths and disease caused by nuclear power by closing remaining nuclear reactors.