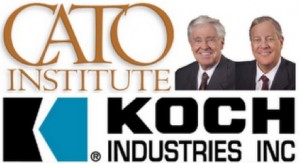 Charles and David Koch — the billionaire industrialist brothers who already exert out-sized influence over American politics — are suing (pdf) to gain direct control over the Cato Institute, one of the country’s leading libertarian think tanks. Cato is a non-profit organization incorporated under Kansas law, which — unusually — allows it to be owned by a board of shareholders. Until recently Cato’s board consisted of four people — founder Ed Crane, Charles Koch, David Koch, and economist William Nikasen. Each held 16 shares valued at $1 per share. When Nikasen passed away in October, 2011, his shares fell to his widow, Kathryn Washburn, who has not yet offered to sell them to the other shareholders, as required by Kansas law. The Kochs are suing Washburn and the Cato Institute to force her to sell her shares to the other shareholders, which would give the Kochs a shareholder majority, and thus definitive control over Cato. The Kochs maintain that this is not a hostile takeover, (pdf) but the chair of Cato’s board, Bob Levy, said the Kochs — who now have the power to appoint half of the board — have been placing “operatives” on the board who are pushing Cato towards supporting Republican party ideals rather than libertarian ideals. Cato’s traditional libertarian stances on issues have often differed with Republican positions, for example by supporting same-sex marriage and hands-off foreign intervention and immigration policies. These more truly libertarian (and liberal) stances led to a falling-out between the Kochs and Cato over the years. But now the Kochs see their opportunity to gain more control over Cato. According to some close to the dispute, the Kochs want to use Cato to create more “intellectual ammo” for their front group, Americans for Prosperity, to use to defeat Obama in the 2012 general election. Some close to the dispute also say that if the Kochs successfully gain control of Cato, it will ruin the Institute’s credibility and lead to its demise.