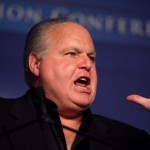 Rush Limbaugh is putting on a bombastic front as advertisers continue their exodus from his show in the wake of his incendiary string of insults against a third-year law student, Sandra Fluke, who testified before House Democrats in favor of Obama’s policy on keeping contraception available to women. The Hollywood Reporter noted that the three hour-long broadcast of Limbaugh’s show March 9 on New York’s station WABC 770 AM contained a total of five minutes of completely dead air time, and that the ads run during the show were mostly unpaid public service announcements. Of the 86 ads that aired, 77 were free public service announcements and seven were for sponsors who have already asked to remove their ads from the show. As of March 8th, 49 sponsors have asked to discontinue their ads on Limbaugh’s show. The most recent companies pulling out include The Girl Scouts of Oregon and Southwest Washington, Aetna, TurboTax, O’Reilly Auto Parts, the American Heart Association, Constant Contact, the New York Lottery, Service Magic, AccuQuote, Regal Assets, Freedom Debt Relief. Other big-name companies that pulled their ads this week included Netflix, Goodwill Industries, Stamps.com, Capitol One, JC Penney, AOL and Sears. Two radio stations have also taken the Limbaugh show completely off their air. Limbaugh minimized the significance of the losses by boasting that he has 18,000 advertisers nationally when local advertisers are included. He equated the flood of advertisers who have already quit his show to “losing a couple of french fries in the container when its delivered to you at the drive-thru.”