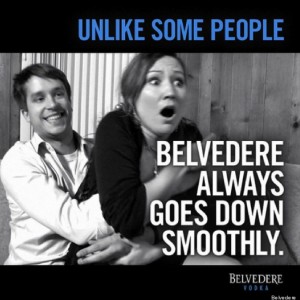 The makers of Belvedere Vodka yanked a controversial ad that appeared to joke about rape. The ad showed a horrified woman trying desperately to escape from a leering man who was grabbing her from behind. The tagline read, “Unlike some people, Belvedere always goes down smoothly.” The company tweeted the controversial ad and posted it on their Facebook page, only to get strong and immediate backlash. Belvedere moved quickly to remove the post and apologized several times. Belvedere’s ad agency, Arnell Group, has done ads with strong sexual overtones for the brand before, but the agency denies that it created this particularly controversial ad.