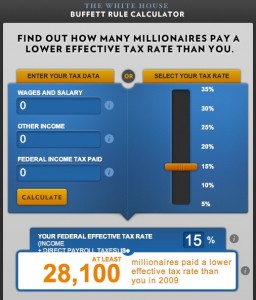 The White House has posted a new online tool people can use to calculate how many millionaires pay a lower effective tax rate than they do. Citizens enter their wages, salary and other income and how much income tax they have paid, click a button and see the estimated number of millionaires who paid a lower effective tax rate than they did in 2009. The calculations demonstrate how under the current U.S. tax system, many millionaires are paying a lower effective income tax rate than most middle class families. In 2009, fully 22,000 American households made over $1 million, but paid the lowest effective tax rate such top earners have paid in 50 years. Of those top-earners, 1,470 paid no federal income tax at all on their million-dollar-plus incomes, according to data supplied by the Internal Revenue Service. The White House unveiled the tool to  promote legislation to pass the Buffett Rule, named after Warren Buffett, the billionaire who famously pointed out that he pays a lower tax rate than his own secretary. The Buffett Rule bill would have enshrined in law that no household that makes more than $1 million should pay a smaller portion of their income in taxes than American middle-class families pay. The Buffett Rule failed in the Senate by a small margin yesterday, despite the fact that multiple polls show that between 60 and 72 percent of Americans support the rule.