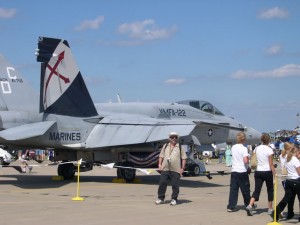 The U.S. Marine Corps Fighter Attack Squadron 122 based out of Beaufort, South Carolina used to be called the “Werewolves,” but they recently adopted a new nickname: they are now called the “Crusaders,” and the symbol painted on their jets is a red, Christian-style cross. The “Crusaders” was a historic nickname used by the squadron from 1958 to 2008, but as they prepared to deploy to Iraq in 2008, the unit’s commander, Lt. Col. William Lieblein, wisely changed the name because “The notion of being a crusader in that part of the world doesn’t float.” The term “Crusader” is derived from the historic European military crusades that took the lives of millions in the middle east in the name of Christianity. Insurgents in the middle east pejoratively call American military personnel “Crusaders.” In March 2012, Al-Qaeda chief Ayman al-Zawahiri referred to International Security Assistance Force troops stationed in Afghanistan as “Crusader Swine.” But the unit’s new commander, Lt. Colonel Wade Wiegel, doesn’t see any problem with changing the squadron’s name back to the “Crusaders.” Mikey Weinstein, who heads the Military Religious Freedom Foundation (MRFF), blasted the change.  Almost a hundred concerned U.S. Marines contacted Weinstein about the change, mostly moderate Protestants and Christians who asked to remain anonymous due to fear of reprisal. They felt the decision to change the squadron’s name was blatantly religious. Through its law firm, MRFF sent a letter to military brass asking the Marine Corps to reverse the name change. “I don’t know that the Marine Corps could do anything more to fuel the cause of jihad” against Americans in the middle east, Weinstein said, saying the change will end up costing the lives of American military personnel. The controversy comes immediately after a recent string of other cultural improprieties by U.S. forces that dramatically inflamed tensions over the U.S. presence in Afghanistan, including the video of Marines urinating on the bodies of dead insurgent fighters and the mass burning of Qu’rans by U.S. forces. MRFF’s confidential sources confirm that all of the squadron’s F/A-18 Hornet jets have been repainted with big, red Crusader crosses and the name “Crusaders.”