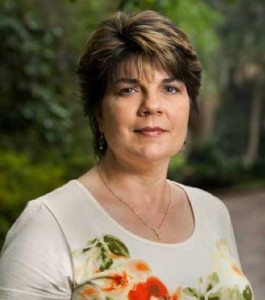 After a lifetime in the church, Teresa McBain, pastor of Tallahassee, Florida’s Lake Jackson United Methodist Church, got a standing ovation when she announced that she is an atheist at the American Atheists National Convention. McBain publicly apologized to her neighbors back home for having been a fundamentalist who knocked on peoples’ doors to offer them religious tracts, hoping to convert them and believing they were wrong for having other beliefs. “I didn’t know anything about you. I’d never seen your faces. You were just ‘those people.’ And I was the one on the right track, and you were the ones who were going to burn in hell. And I’m happy to say, as I stand before you right now, I’m going to burn with you,” McBain said at the convention. McBain served as a pastor for ten years. Her coming out as an atheist resulted partly from her  participation in the Clergy Project, a private, invitation-only, safe online community of current and former pastors, priests and rabbis who no longer hold the supernatural beliefs of their religious traditions. The Clergy Project was founded in March, 2011 by Dan Barker, also formerly a minister for 19 years and co-founder of the Freedom from Religion Foundation (FFRF) in Madison, Wisconsin. When the project started, it immediately gained 52 members Since then it has grown to over 200 participants. McBain said she felt she was living a double life and couldn’t take it any more. Her father was a pastor and she found God at age 6, but over the years she started asking herself questions about her religion like “Is there any evidence of God at all? “Would a loving God torment people for eternity?” After years of battling internally with her thoughts and conclusions to those questions, she finally could no longer tolerate the disconnect between her true beliefs and her job. After her appearance at the American Atheists Convention, McBain was shunned and locked out of her church, only a few of her friends spoke with her, and job interviews she had lined up got canceled. She got support, however, from members of the secular community who recognize the extent of her bravery and the social difficulty caused by her admission.

Teresa McBain announces her atheism in the following video of the AA Conference. (Start at minute 18:00)