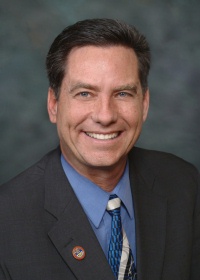 New Republican legislation has been introduced in Colorado that purely benefits the oil and gas industry. House Bill 1356, introduced by Rep. Jerry Sonnenberg (R-Sterling), would punish local governments by withholding their severance tax dollars if they do anything that stands in the way of oil or gas drilling. Citizens in Sonnenber’gs district who are concerned about the negative health and environmental effects of drilling oppose the measure. The city of Sterling, Colorado also opposes Sterling’s bill, which prompted Sonnenberg to call Sterling government officials “greedy.” After Sterling city officials came out against his bill, Sonnenberg posted a Tweet to his Twitter account that read, “City of Sterling just testified they should get oil and gas money even if the city stops the industry from producing. Can you say greed?” Sonnenberg told the Colorado Statesman that opposition from cities doesn’t matter because governments don’t vote.  “Maybe if governments voted, it would matter,” Sonnenberg said. Sonnenberg says his bill is about defending property rights, limiting government spending and encouraging new oil and gas drilling throughout the state.  At a legislative hearing for the bill, no one testified support of the measure, but several people spoke out in opposition. It isn’t the first time Rep. Sonnenberg has worked to benefit the drilling industry at the expense of citizen and environmental health and safety. In 2008, Sonnenberg worked to block the Colorado Oil and Gas Commission from hiring 21 new employees to monitor the drilling industry’s compliance with new environmental rules. When contacted by email and asked if he is a member of the American Legislative Exchange Council, a lobby group that accepts funding from Exxon Mobil and  other energy industry interests, Sonnenberg dodged the question and ultimately refused to answer.