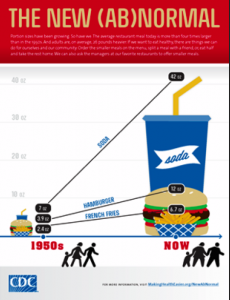 The average fast food restaurant meal today is over four times bigger than it was in the 1950s, according to a new website by the U.S. Centers for Disease Control. The site, MakingHealthEasier.org, encourages healthy behaviors to help head off chronic disease. CDC finds that portion creep has resulted in a “new abnormal” for food portions in American society. In the 1950s, the average fountain soda at a fast food restaurant was just 7 ounces. Today it’s 42 ounces. The average hamburger was 3.9 ounces, and today it’s 12 ounces. A portion of french fries in the 1950s was just 2.4 ounces and today it is 6.7 ounces. Since the early 1900s, the average size of a chocolate bar has increased by 1,233 percent. Since the 1960s, the weight of the average American woman has increased by 24.5 pounds and the average weight of a man has increased by 28 pounds. As portions have grown, so have obesity and diabetes, and the problems and medical expense they bring.  In 1958, only about one percent of the country’s population had diabetes. By 2009, that number had risen 22 percent. In 2011, an estimated  25.6 million (11.3%) (pdf) of people age 20 and above were diagnosed with diabetes in the U.S., with an estimated 7 million more undiagnosed. Medical expenses for diabetics are over two times greater than people without diabetes.