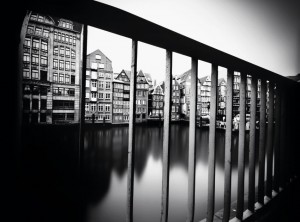 Garbage workers around the world have a physically difficult, smelly job few people want, and typically don’t get much respect or recognition for their efforts, either. So the sanitation department in Hamburg, Germany decided to find a way to improve respect for their workers. With the help of a German advertising agency and a garbage worker who moonlights as an amateur photographer, they came up with a PR campaign that worked to turn Hamburg’s garbage collectors into celebrities. Sanitation workers converted a 290 gallon trash dumpster into a pinhole camera and hauled it around on their routes to places the workers had said they had always wanted to photograph. Dubbed the “TrashCam,” the container had a 0.3-inch pinhole in one side. The workers would open a flap over the pinhole and allow light to project onto a 39 inch by 31 inch piece of photographic paper inside the dumpster, creating a photo. Workers would expose the paper for anywhere from five to 70 minutes, and the photos were developed in a lab later that evening. The result was a series of striking black and white photos that won the sanitation workers a prestigious advertising industry award at the Cannes Lion advertising festival. The photos will be on exhibition starting June 23 at the Axel Springer Passage exhibition space in Hamburg. You can see the photo gallery here.