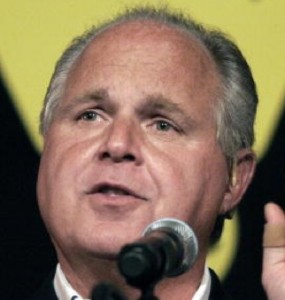 Three more businesses have pulled their ads from Rush Limbaugh’s radio show in Missoula, Montana in response to a grassroots effort by Missoula citizens to let KGVO Radio, broadcaster of the show, know they have had enough of Limbaugh. The latest advertisers to drop their sponsorship brings the total number of advertisers who have dumped Limbaugh’s show in Missoula to 33. Supporters of the effort to push Limbaugh off the air in Missoula, have been called “radicals” for contacting businesses to let them know they disapprove of their sponsorship of Limbaugh’s show. “Fighting bullies and speaking our minds doesn’t make us radicals. It makes us good, patriotic Americans,” responds Dave Chrismon, organizer of RushOutOfMissoula.com. Chrismon has instructed people contacting businesses over their ads to be polite and respectful when they call. “Be an anti-bully,” he says, urging people to “Drive your point home by being respectful.” RushOutOfMissoula.com says it is the voice of the free market and of a “new, bully-free community standard.” KGVO Radio has not yet responded to the news about the most recent three businesses to pull their ads off the show. The station’s last web post about the fracas is dated May 1, 2012. It thanks Limbaugh supporters for their passionate defense of his show.