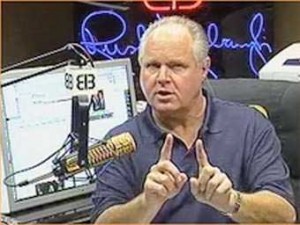 RushOutOfMissoula.com, the grassroots effort to push Rush Limbaugh off KGVO Radio in Missoula, Montana, announced this week that three more advertisers have walked away from Limbaugh’s show in the last week, bringing the total to advertisers who have ended their sponsorship of Limbaugh’s show on KGVO to 35. Dave Chrismon, organizer of RushOutOfMissoula, thanked supporters for “helping draw attention to this bully and his track record of nasty, personal attacks.” When RushOutOfMissoula first debuted on April 13, 2012, the Limbaugh Show in Missoula aired four public service announcements. By June 29th that number had jumped to 13 as the radio station struggled to fill gaps left by advertisers fleeing the show. Ads for local businesses dropped from 26 in April to 17 on June 29th. KGVO is still filling the same number of ad slots but is repeating many of the same ads frequently and running many more PSAs in place of paid ads. Adair Jewelers, Sunshine Motors, Trader Brothers, and H & H Meats are some of the local advertisers whose ads have run more than once in the same program. Adair Jewelers, whose owner denounced the RushOutOfMissoula effort as “blackmail,” has had as many as eight ads run in the same program. Businesses and nonprofit groups who have removed their advertising from Limbaugh’s show report they have continued to receive harassing phone calls from Rush supporters. To stop this, RushOutOfMissoula stopped listing these businesses on the site’s “Rush’s Advertisers” page, and changed to an “opt-in” policy where businesses will appear if they request it.  The group will continue to keep records of advertisers who pull their ads as a result of efforts by RushOutOfMissoula.