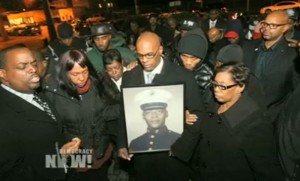 The family of Kenneth Chamberlain, Sr. has filed a $21 million civil rights lawsuit against the City White Plains, New York and the White Plains Police Department. Kenneth Chamberlain, Sr., 68, was shot dead inside his own home in the early morning on November 19, 2011 by White Plains police after he accidentally set off his life aid medical alert pendant while sleeping. Police arrived at his apartment, but responded as though a crime was in progress instead of as if responding to potential medical emergency. The police knocked in Chamberlain’s door and demanded he open it. Chamberlain told the police he was okay, and didn’t need their help, but the police continued to pound on Chamberlain’s door, yelling racial slurs and demanding Chamberlain open the door.  Afraid, Chamberlain refused. Police then broke down Chamberlain’s door, shot him with a taser, then fired beanbags at him. Finally, White Plains Police Officer Anthony Carelli shot Chamberlain dead. Police claimed Chamberlain tried to attack them with a knife. Video from a camera on the taser gun surfaced in May, showing police breaking down Chamberlain’s door and shooting him with the taser. Chamberlain is seen standing inside his apartment, shirtless and wearing boxer shorts. The family filed the lawsuit just under two months after a Westchester County grand jury refused to indict Police Officer Anthony Carelli for the shooting.