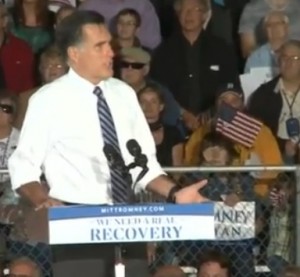 Romney speaks to crowd in Defiance, Ohio (from YouTube)

GOP Presidential candidate Mitt Romney openly lied — again — at a campaign event in Defiance, Ohio Thursday, October 25, when he told a crowd of about 12,000 that Jeep is considering shifting all of its North American production to China. “I saw a story today that one of the great manufacturers in this state, Jeep, now owned by the Italians, is thinking of moving all production to China,” Romney said. The statement is verifiably false. Chrysler’s vice president of communications, Gualberto Ranieri, publicly corrected Romney in a blog post on the company’s website. “Let’s set the record straight,” Ranieri wrote, “Jeep has no intention of shifting production of its Jeep models out of North America to China.” Representatives from Romney’s campaign said candidate had misread the first two paragraphs of a Bloomberg news report that discussed the manufacture of Jeeps for the Chinese market. The article started out by saying Fiat, the company that now owns Chrysler, “plans to return Jeep output to China and may eventually make all of its models in the country.” It said that Chrysler and Fiat are evaluating additional production sites in China, not that they are shifting their output from North America to China.  Despite being publicly called out on the purported error by Chrysler, neither Romney nor his campaign workers have corrected the erroneous statement.  Quite the contrary — the Romney campaign has built on it. Romney has created a new campaign ad around his misleading statement. The ad says, “Obama took GM and Chrysler into bankruptcy and sold Chrysler to Italians who are going to build Jeeps in China. Mitt Romney will fight for every American job.” The Salt Lake City (Utah) Tribune, a conservative newspaper in the home of Mormonism, endorsed President Obama in an October 19th editorial titled “Too Many Mitts”, that called Romney the Republican Party’s “shape-shifting nominee.”