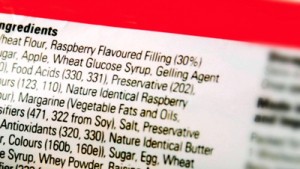 Food additives that sound more like chemicals from a lab are turning people off.

People who cringe at the weird-sounding chemical additives in food, like sodium stearoyl-2-lactylate, guar gum or disodium EDTA, are starting to create and share home-made versions of their favorite processed foods that are free of artificial chemicals and additives. On Pinterest, a social media website that facilitates sharing of recipes, a growing number of people are concocting and sharing chemical-free versions of their favorite highly-processed foods. One member shared a recipe for home-made “Condensed Cream of Something Soup,” offered as a chemical-free thickener to use in casseroles instead of expensive and additive-filled  canned Campbell’s “Cream of” soups. Another person posted a recipe for home-made Oreos that has gotten raves. Still another person shared a way to make her favorite childhood processed food, Pop Tarts, at home using recognizable ingredients. Someone who claimed to be “disgusted” by processed, bottled Bleu cheese dressing posted a simple recipe for home-made Bleu Cheese dressing. Still someone else shared an easy recipe for do-it-yourself red enchilada sauce, saying “you’ll never go back to the canned, store-bought stuff again.” A substantial portion of our modern food supply is manufactured in factories using chemicals and additives, some of which, according for the Center for Science in the Public Interest, are poorly tested and may not be worth the risk of ingesting them. Chemicals added to food include preservatives, anti-caking agents, artificial coloring, emulsifiers and thickeners, many of which have names that sound more like they belong in a laboratory than the average family’s’s kitchen. CSPI recommends avoiding certain additives, including some artificial colorings, like caramel coloring, the main food coloring in Coca Cola, Pepsi Cola, Dr. Pepper and some Snapple drinks. Additives have also been implicated in some illnesses, particularly in children. The Mayo Clinic says some studies show that certain food colorings and preservatives may increase hyperactive behavior in some children. The time may be arriving when people have reached a limit in what they are willing to tolerate as far as unrecognizable ingredients in foods.