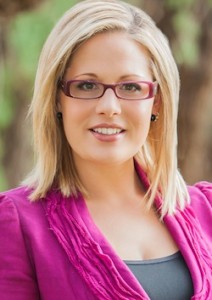 Former Arizona state senator Kyrsten Sinema made history November 6 when she became the first openly atheist female ever to be elected to Congress. Sinema, 36, replaces Rep. Pete Stark of California as the only other openly atheist person ever to have served in Congress. Stark, who will turn 80 this year, represented a district near San Jose, California. While holding office in 2007, he went public in about his lack of belief in God. In spite of this admission, he won re-election twice, making huge in-roads for non-believers’ representation in Congress. Stark’s coming out about his lack of belief in God helped paved the way for Sinema’s election. Sinema will represent Arizona’s 9th Congressional district, which includes parts of Phoenix, Scottsdale, Mesa, Chandler, Tempe and Paradise Valley. Sinema, a former Mormon, is also openly bisexual. While Stark was elected to office prior to admitting he was an atheist, Sinema is the first candidate ever in U.S. history to run openly as a non-theist and get elected.

1 comment for “History Made: An Open Atheist is Elected to Congress”