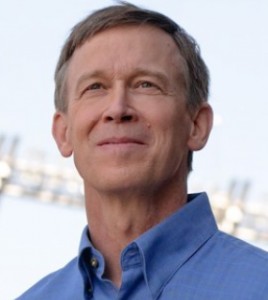 Colorado Gov. John Hickenlooper courageously said the time is right to talk about guns and gun violence in the U.S. and what can be done about it.

Last Thursday, ironically just one day before the latest tragic school massacre in Connecticut, Colorado Governor John Hickenlooper became a lone voice of political sanity on gun issues in the U.S. when he said it’s finally time to have an open discussion about guns and gun control in Colorado. Hickenlooper said he wanted to wait until a few months had passed after the Aurora Theater massacre to raise the issue, and no sooner did he mention it than yet another horrific mass shooting took place in an elementary school in Connecticut, killing 20 very young children and seven adults. Today, on the day of that tragic massacre, President Obama backed up Hickenlooper. Obama, reacting at a White House briefing as many of us do to such shootings, with great sadness, uttered a statement that it is finally time for action to be taken to reduce gun violence in the U.S.:

“As a country we have been through this too many times. Whether it is an elementary school in Newtown, or a shopping mall in Oregon, or a temple in Wisconsin, or a movie theater in Aurora, or a street corner in Chicago — these neighborhoods are our neighborhoods, and these children are our children. We’re going to have to come together to meaningful action on this, regardless of the politics,” Obama said.

In addressing the issue a full day before the latest gun massacre, Hickenlooper outed himself as one of the most courageous politicians currently in office across the country. The time could be right for Colorado to lead the nation in enacting much-needed measures to slow the proliferation of guns and stop their flow to unstable people, now that both legislative houses are in Democratic hands. Policies Colorado legislators could consider in the upcoming year include bills to ban assault weapons, restrict sales of guns to people with mental health problems, ban guns on college campuses and limit magazine sizes. Colorado citizens may also finally be ready to back such laws, too, after turning solidly blue in the last election and having endured the two huge tragedies of the Columbine and the Aurora Theater massacres.

There is also one more sign that Colorado citizens may have had their fill of guns: Last August, the University of Colorado announced it was banning firearms in its dorms. But it also announced it would also create a segregated dorm area for students who have concealed-carry permits. Three months later, after the University put these policies into action, not one single student had signed up to live in the dorm that allows guns on either the Colorado Springs or the Boulder campus.

In the meantime, we have a massive TSA infrastructure at airports with X-Ray machines and forced use of baggies for our shampoo to quell the perception of potential terrorist attacks by foreign entities, while the real terrorism is happening, over and over, well outside of that sphere, in schools and stores and movie theaters and other places we should normally feel perfectly safe — all real, all happening with greater and greater frequency, and all facilitated by Americans and our current slate of gun laws.