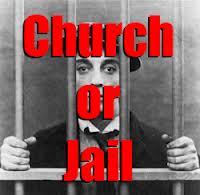 Oklahoma 17 year old Tyler Alred pled guilty to first-degree manslaughter after drinking and driving last December 3 and getting into a vehicular crash that killed his 16 year old passenger, but instead of sentencing Alred to prison, Oklahoma district judge Mike Norman sentenced Alred to complete high school, finish welding school, take drug and alcohol tests for a year, wear an alcohol monitoring bracelet and attend church for ten years. Judge Norman had sentenced people to attend church before as punishment, but never for manslaughter. The Oklahoma chapter of the American Civil Liberties Union (ACLU) cited the sentence as a clear violation of the free exercise clause of the First Amendment to the U.S. Constitution. Judge Norman himself acknowledged the sentence is illegal, but believes he can get away with it because he doesn’t think anyone will appeal it. No parties who have standing in the case are likely to object to the sentence because it keeps Alred from having to go to prison. The pastor of the church Alred has attended in the past questioned the judge’s use of church as criminal punishment, saying “What will the judge do if the young man changes his [religious] affiliation in the next few years? Will he be allowed to switch to a mosque or become an atheist?” The ACLU is particularly concerned that the judge was fully aware that the sentence he handed down was illegal, but did it anyway. Ryan Kiesel, executive director of the Oklahoma ACLU said, “The Constitution is not exercised at your discretion. You take an oath to uphold it all the time, not just sometimes.”