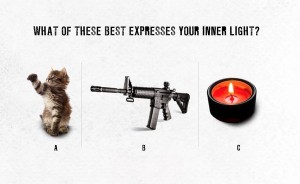 A portion of Bushmaster’s tasteless online promotion. (The company has since pulled it.)

Bushmaster, the company that makes the machine gun Adam Lanza used in the Sandy Hook Elementary School massacre December 14, 2012, was forced to pull a shockingly bad ad campaign from its website that taunted men about their masculinity and portrayed them as not masculine unless they owned a gun. Bushmaster’s site quizzed men about whether they ate tofu, knew how to change a tire or had ever watched figure skating “on purpose.” If men passed the “quiz,” they would get awarded a “Man Card” that entitled them to “leave the seat up without shame.” A “Man Card” could be revoked if a man was a “coward,” a “cry baby” or found himself on a “short leash.” One part of the site said “Colin F. avoids eye contact with tough-looking 5th graders. MAN CARD REVOKED.” The ad also made it clear that a man could reclaim his manhood by buying a Bushmaster assault rifle,  like the one Adam Lanza allegedly used at Newtown.