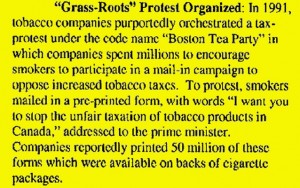 Excerpt from a Tobacco Manufacturers Association summary of tobacco-related activities in the western hemisphere, January, 20000

Rather than being a purely grassroots movement that arose spontaneously in 2009 as the media has led people to believe, the Tea Party developed partly as a result of tobacco industry efforts to oppose smoking restrictions and tobacco taxes beginning in the 1980s, according to a new study by researchers at UC San Francisco.  In 2002, long before the mainstream media widely discussed tea party politics, Citizens for a Sound Economy (CSE), a nonprofit funded in part by cigarette companies since 1987 to support a pro-tobacco political agenda, started its “US Tea Party project.” Its website, http://www.usteaparty.com, stated “Our US Tea Party is a national event, hosted continuously online and open to all Americans who feel our taxes are too high and the tax code is too complicated.’’ In 2004, CSE split into the two tea party organizations: Americans for Prosperity (AFP) and FreedomWorks. Those two groups, say the study authors, have since waged campaigns to turn public opinion against tobacco taxes, smoke-free laws and health care reform in general.  “If you look at CSE, AFP and Freedom Works, you will see a number of the same key players, strategies and messages going back to the 1980s,” said lead author Amanda Fallin, PhD, RN, also a CTCRE fellow. “The records indicate that the Tea Party has been shaped by the tobacco industry, and is not a spontaneous grassroots movement at all.”

“Nonprofit organizations associated with the Tea Party movement have longstanding ties to tobacco companies, and continue to advocate on behalf of the tobacco industry’s anti-tax, anti-regulation agenda,” said senior author Stanton A. Glantz, PhD, director of the UCSF Center for Tobacco Control Research and Education (CTCRE) and a UCSF professor of medicine and American Legacy Foundation Distinguished Professor in Tobacco Control. The study will appear on Feb. 8, 2013 in the journal Tobacco Control, and shows that rhetoric and imagery evoking the 1773 Boston Tea Party were used by tobacco industry representatives as early as the 1980s as part of an industry-created “smokers’ rights’’ public relations campaign opposing increased cigarette taxes and other anti-smoking initiatives. From previously secret tobacco industry documents available at the UCSF Legacy Tobacco Documents Library, IRS filings and other publicly available documents, the study authors traced a decades-long chain of personal, corporate and financial relationships between tobacco companies, tobacco industry lobbying and public relations firms and nonprofit organizations associated with the Tea Party. The research uncovered the tobacco industry’s ongoing opposition to health care reform, dating back to a major campaign waged against President Bill Clinton’s proposed 75 cent cigarette tax to help finance it. “Tea party symbolism is nothing new for cigarette companies and their allies, which for many years have been cynically using a hallowed symbol of American freedom in order to advance their own interests,” said co-author Rachel Grana, PhD, a CTCRE fellow.

The UCSF researchers sounded a call for greater transparency of organization funding “so that policymakers and the general public – including people who identify with the Tea Party – can evaluate claims of political support for, and opposition to, health and other public policies.’’

Source: University of California San Francisco Center for Tobacco Control Research and Education, February 8, 2013 – a live presentation about the paper will be viewable free at the website of UCSF’s annual Its About a Billion Lives symposium, to be held today starting 8:30 a.m. Pacific Time at UCSF.