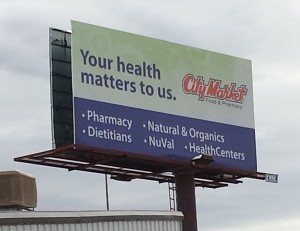 Can you count the number of lies in this sign?

Recently City Market grocery stores, a chain owned by Kroger Company, started running billboards in Grand Junction, Colorado that say “Your health matters to us.” The ads boast that City Markets have dietitians, pharmacies, “natural and organic” foods, “health centers” and “NuVal,” a scoring program that ranks the nutritional value of some foods they sell on a scale of 1 to 100.  I called a local City Market store to find out how to get in touch with one of their dietitians but was told they didn’t really have any. “It’s misleading,” said Pansy Hubbard, a Grand Junction City Market service counter employee, about the billboard campaign. She said there aren’t any registered dietitians at any of the Grand Junction stores.  People with a computer and an Internet connection can find their way to Kroger’s website, where, if you dig a little you can find links to email addresses of dietitians, but the inference that City Markets have dietitians available at their stores is patently false, at least in our area. But the stores’ claim about dietitians isn’t even the most misleading part of the ad.  The biggest thing that negates City Market’s claim that “Your health matters to us” is that all their stores knowingly continue to sell a product that is well-known to kill hundreds of thousands of Americans every year: cigarettes. Cigarettes are a known addictive and deadly product, and City Market makes lots of money off them despite what they do to peoples’ health.  This makes it very clear that money is what matters to City Market and the Kroger Company, not their customers’ health.

Some other store chains besides Kroger/City Market can now make a more honest case that they care about their customers’ health. Target stores, for example, stopped selling cigarettes chain-wide in 1996, and are still very much in business. Other stores that truly promote healthy lifestyles have quit selling cigarettes and said publicly that selling tobacco products is not conducive to their pro-health mission.

They are absolutely right.

Selling cigarettes while at the same time claiming care about peoples’ health is deceptive; it’s a lie and a flat-out contradiction. Richmond, California, San Francisco, Boston and about 18 other Massachusetts cities and towns have all passed ordinances banning pharmacies and stores that have pharmacies within or health care professionals on their grounds, from selling cigarettes, thus preventing them from making these kinds of self-serving lies to potential customers. City Market is “healthwashing” their cigarette sales with claims that they are concerned about people’s health. They are, in fact, trying hard to cover up the fact that they don’t really care about people’s health one bit.

Here’s how you can tell if a store that claims to care about your health is telling the truth: any such store will not sell cigarettes.

No matter how many ads they run, or how many gimmicks they use in their ads trying to convince you to the contrary, City Markets DO NOT care about people’s health at all.

They care only about making money off the suckers (oops…”customers”) they can convince to believe their lies.