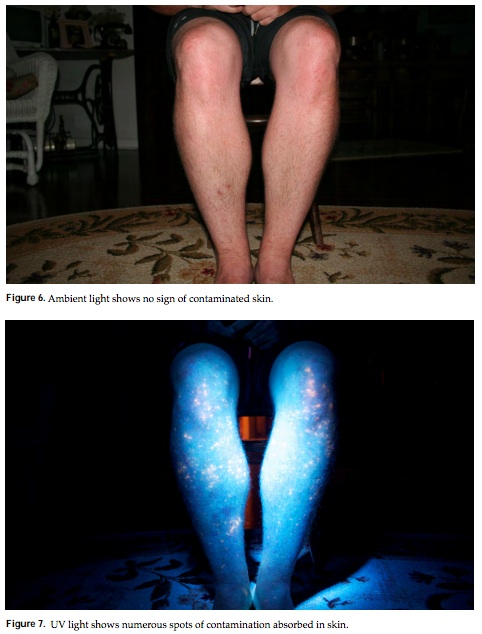 Studies have found oil/Corexit® residue accelerates the absorption of toxins into the skin. The results aren’t visible under normal light (top), but contamination that has worked its way into the skin appears as fluorescent spots under UV light (bottom). Photo Credit: James H “Rip” Kirby III, Surfrider Foundation

Newsweek magazine published a scathing expose’ this week about BP’s behind-the-scenes efforts to limit what the public saw and understood about the company’s disastrous 2010 Deepwater Horizon gulf oil spill.  BP assured thousands of fishermen, on-shore residents and workers they hired to help with spill cleanup operations that the proprietary oil dispersant they used called “Corexit” was as safe as dish soap, but people exposed to the Corexit/oil mixture subsequently fell ill with a range symptoms that mimic Gulf War Syndrome, including muscle spasms that rendered their hands unusable, neurological problems like short term memory loss, painful skin inflammation and breathing problems. A Government Accountability Project (GAP) investigation done after the fact found BP purposely withheld manufacturer’s safety manuals for Corexit from the fishermen and other workers. In interviews after the disaster, cleanup workers said BP had threatened to fire any workers who complained about the lack of protective clothing and respirators. Airplanes spraying Corexit also indiscriminately sprayed the substance over the fishing boats BP hired to help contain the spill, exposing the fishermen to multiple doses of the chemicals. Nineteen months after the Deepwater Horizon explosion, the peer-reviewed scientific journal Environmental Pollution published a study that found that crude oil becomes 52 times more toxic when mixed with Corexit than it would otherwise be if left alone.  GAP representatives asked BP to pay for the medical treatment of victims of Corexit-and-crude poisoning but BP has refused. BP’s cover up demonstrates the huge amount of power corporations wield and the inability or unwillingness of governments to restrict that power. Eleven people were killed in the Deepwater Horizon disaster, but no one has yet faced any criminal charges. What’s worse, the BP spill and its after-effects haven’t prompted any changes in public policy towards big corporations and their activities. It’s as though the U.S. government has gleaned no wisdom at all from the disaster and BP’s subsequent actions.

Source: Newsweek, “What BP Doesn’t Want You to Know about the 2010 Gulf Oil Spill,” April 22, 2013 (Accompanying photo is from the University of South Florida study “Findings of Persistency of Polycyclic Aromatic Hydrocarbons in Residual Tar Product Sourced from Crude Oil Released During the Deepwater Horizon M252 Spill of National Significance,” [PDF], April 14, 2012)