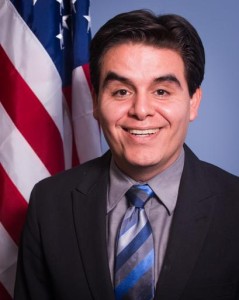 State Representative Juan Mendez of (D-Tempe) made history May 22 by giving the Arizona state legislature’s first secular invocation in place of the body’s usual morning prayer. Rep. Mendez began by asking legislators not to bow their heads as they usually do, but instead to take a moment to look around the room “at all the men and women here, in this moment, sharing together this extraordinary experience of being alive and dedicating ourselves to working toward improving the lives of the people in our state.” He then cited the challenging debates, moments of tension and ideological division and frustration legislators experience, but asked his colleagues to focus more on what they have in common than on their differences. He concluded by quoting Carl Sagan. Afterwards, Rep. Mendez came out as a non-theist at a press conference. As he spoke to the press and media, a group of people stood behind him holding signs that said, “One in Five.” Rep. Mendez pointed out that one American in five, or 1.3 million Arizona citizens, choose not to affiliate with a religion. “We are learning the importance of coming out, and visibility and how important it is in this effort to get non-believers to feel welcomed and valued,” Mendez said. “We do ourselves a disservice if we exclude or ignore the concerns of so many people in Arizona. And I simply want to let others know that we have more in common than we have in differences.” The Secular Coalition of Arizona, the legislative voice of the Arizona non-theistic community, said on its Facebook page, “We applaud the courage and character of Representative Juan Mendez for publicly standing in solidarity with Arizona’s secular community.” After the secular invocation, Republican Rep. Steve Smith insisted on having a Christian prayer, and asked House members to join him in another daily prayer in “repentance.” Video of Rep. Mendez’s groundbreaking invocation can be seen here.