On its website, the Grand Junction Area Chamber of Commerce touts green business practices. It sports photos of green leaves and solar panels on its Facebook page and offers up articles like the “Top 10 Green Practices for Landscapers” and “Top 10 Green Practices for Auto Repair.” The chamber urges businesses to take steps to reduce air pollution, protect people’s health and conserve water. Sounds pretty good, right? Like they really care about the environment, huh? So does this mean the Chamber is pro-environment?

Not by a long shot.

The Grand Junction chamber tries to put on a green face but it is one of the biggest political boosters in the state when it comes to promoting development of oil shale and tar sands — two of the most environmentally destructive and economically impractical mining practices in the world today.

In April, 2012, after the U.S. Bureau of Land Management (BLM) announced that it was going to review and update its rules for developing oil shale on public land, the Chamber jumped into action, writing a letter (pdf, at page 438) asking BLM to open more land to oil shale development. In its comments, the chamber puffed up its importance, inferring that it spoke for “most local residents” and represented “over 30,000 employees in Mesa County Colorado.” Phyllis Norris, then president of the Chamber board, wrote, “The oil shale resource is a huge domestic energy asset that should be developed for the benefit of the American people and American businesses, especially in light of the looming increases in the prices we pay at the pump….Most local residents are more worried about jobs and economic development than the rehashing of the politics of oil shale development.”

In the throes of its unquestioning boosterism, the Chamber completely ignored the well-known environmental problems of shale development, and the fact that oil shale extraction has never been an economically viable energy alternative in the U.S. The chamber also completely ignored the fact that pursuit of shale development has already led Mesa County down a path straight to economic disaster.

In 1981, Exxon geared up for its massive Colony Oil Shale Project in Parachute. It hired thousands of workers and set up the expensive infrastructure necessary to process oil shale. But after years of gearing up for the project, on Sunday, May 2, 1982 — known to locals as “Black Sunday” — Exxon suddenly pulled the plug on the project because of lower oil prices and higher-than-expected cost of production. Thousands of western slope workers were thrown out of their jobs all at once. Area residents were forced to default on their bills and lost their homes. Businesses slammed their doors and properties throughout Mesa County sat empty for years and years afterwards. The local slogan became “Last person out of Grand Junction, please turn off the lights.”

No one at the Chamber seems to remember anything about this piece of local history. 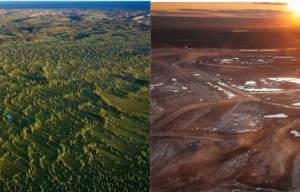 Before and After photo of Alberta’s oil sands. Now companies are working to start mining oil sands in eastern Utah.

Oil shale and tar sands development is basically squeezing oil from rocks. It typically involves strip or pit mining, and high heat is required to get at the oil locked inside the rock or sand — a process that uses lots of energy. Shale and tar sands mining have many inherent problems. For one, the oil inside the rock or sand isn’t pure. It often contains sulfur, arsenic or other chemical contaminants which have to be removed — at even more expense — before processing the finished product.

In addition, sand and shale pit mining creates acid drainage and toxic ponds that kill birds and other wildlife. The mining activity erodes the land, contaminates surface and groundwater, emits sulfur and other air pollutants, and spreads pollutants during the processing and transport of any finished products. Surface mining destroys the recreational and biological value of the land, and emits greenhouse gases. The retort, or heating processes for oil shale and tar sands require large quantities of water, which becomes contaminated in the process.

So numerous and so onerous are the problems with oil shale and tar sands mining that a group of local business owners, including farmers, ranchers, recreational and manufacturing businesses banded together to directly oppose the Grand Junction Chamber’s most recent unquestioning push to bring oil shale development to nearby BLM lands.

Sure enough, the Chamber’s 2012 support of oil shale development blew up in everyone’ face after Shell Oil announced, predictably, in September, 2013 that it was closing down its shale development research project in Rio Blanco County. Chevron, which also had a lease from BLM to develop oil shale in Rio Blanco County, also abandoned its efforts. Fortunately, this time they pulled out before the project had gotten big enough to devastate the local economy again.

Until its actions more closely match its words, citizens and local businesses would be well-advised not to trust any of the Grand Junction Chamber’s recommendations on environmental issues.