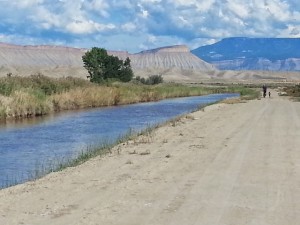 A Long Tradition of Trespass

People have trespassed on the Grand Valley’s canal banks for generations, since the canals were built over 100 years ago. During that time the “no trespassing” rule has almost never been enforced. Mesa County Sheriff Stan Hilkey says not one single case of canal road trespassing has ever been prosecuted in the valley in the 28 years he’s been with the Sheriff Department. “Maybe someone has gotten a ticket,” said Hilkey, but basically it’s “the lowest priority misdemeanor there is.”

In law enforcement terms, that means if someone calls 911 and reports a canal-bank trespassing, they probably shouldn’t expect a car to respond. 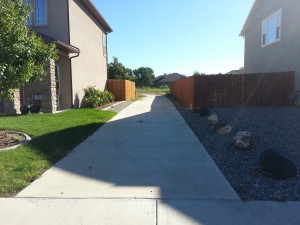 “No Trespassing?” Grand Junction subdivisions have sidewalks between houses that lead right up and onto the canal banks

The canals and their associated roads and facilities are owned by the U.S. Bureau of Reclamation (“Reclamation” or “BuRec”), which is amenable to opening up the canal banks to non-motorized public recreation. Some of the canals run across private property, and in those cases the U.S. government (BuRec) holds easements or rights-of-way for canal maintenance and operation. In an August 13, 2013 letter to Christian Reece, Chair of the Grand Junction Planning Commission (pdf), Ed Warner, Area Manager of BuRec’s Grand Junction Office wrote,

“Reclamation is open to trail development on or near Reclamation project lands if such development does not interfere with the operation and maintenance of the water project and does not increase liability to its managing entities and the United States [government]. In addition, Reclamation will require the concurrence of the [Grand Valley Water Users] Association and the [Orchard Mesa Irrigation] District before we will consider any trail on any Reclamation [Operations and Maintenance] road.”

If the canal banks were opened to the public, BuRec says, they would want some other legal entity, like the City, the County or a trail association, to assume the responsibility and cost for operation and maintenance of the trails, and for enforcing law and order on them. That makes sense because BuRec isn’t in the business of operating trails. BuRec also wants written consent from their contract irrigation companies and the underlying private land owners along the canals. 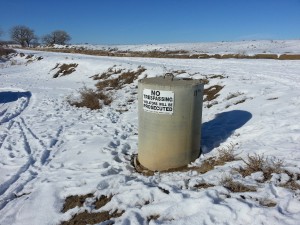 According to Sheriff Hilkey, to prosecute a trespass, a private landowner must be able to identify a trespasser by name, and prove the trespass occurred.

A landowner could take a time-and-date-stamped photo of someone walking on their section of the canal bank, for example, but they’d have to get the trespasser’s name — information a trespasser is unlikely to give up. Upon seeing an alleged trespasser, a landowner could call 911, but if there are any crimes at all of higher priority going on in town, due to the extreme low priority of canal bank trespassing calls, a car probably won’t respond. Also, because it takes only seconds for a walker, biker or runner to finish crossing a discrete piece of private land, there’s little time for a landowner to document the alleged “crime.” Another consideration is the time a landowner must invest in prosecuting an alleged trespass. He or she would have to drive down to the Sheriff’s office to file a report, make an official statement and/or eventually appear as a witness.

Given the high bar of evidence to press charges, and since trespassing on the canal roads is an act that essentially leaves no evidence other than footprints, it’s no wonder that prosecution of this “crime” has long been non-existent.

As more community-minded people and younger, more active generations move into our area, more area residents than ever are looking at the canal roads and starting to ask why these high-potential recreational gems aren’t officially open to the public. Whenever the subject of opening up the canal banks to non-motorized public recreation comes to the fore, as it does with increasing frequency in Mesa County, private landowners along the canals invariably say their biggest worry is the legal liability they would face for people who might get hurt on their land.

But these fears are unfounded.

In 1970, the state legislature enacted the Colorado Recreational Use Statute specifically to encourage rural land owners to make their land available for recreational purposes. This law sharply limits landowners’ liability towards people who recreate on their land. The law says that if a land owner allows the general public onto their land for recreational purposes without charge, the owner is not liable for injury suffered by a recreational user. Landowners are only liable for injury if they intentionally or maliciously injure someone who uses their land, for example by setting up a trip-wire designed to shoot someone who triggers it by walking across their land. In enacting this statute, the legislature took the rare further step of requiring that if a landowner is ever sued by a recreational user and the landowner prevails, the recreational user is required to pay the landowner’s attorneys fees and other related court costs. The statute provides extra protection to landowners by stating specifically that water is not an attractive nuisance. What more could possibly be done to protect landowners from liability? Not much.

So What to Do? 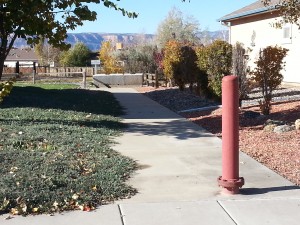 Sidewalks lead right up to the canal banks but have “No Trespassing” signs and big concrete barriers that can be stepped around easily.

Basically, what stands between the indefinite perpetuation of what are essentially fake “no trespassing” zones and turning the main canal roads into a fabulous recreational asset are the irrigation companies, which contract with BuRec to operate the canals, and the few private landowners along the canals who keep bucking efforts to officially open the canal roads up to the public.

People who want to recreate on the canals can seek permission from individual landowners to walk, run, bike or ski on their canal banks. Who owns the land along the canals is discoverable, and it’s public record. People with an Internet connection can go to emap.mesacounty.us — the county assessor’s map — to find out who owns the parcels along various sections of the canals. Once on the assessor’s map, use your cursor to drag the map to your area of interest and then zoom in on the parcels of interest. On the “Selection Tools” menu, click on the exclamation point and then click on any parcel. A new window pops open showing who owns that parcel, their contact information (including their city of residence, as often parcels are owned by people who live out of town), a description of the parcel and how it’s used (e.g., residential or agricultural) and the property tax the owners pay on the parcel. People can use the contact information to ask formal permission to pass across the land, or find out if the owners live out of the area.

You can also write to the various irrigation companies (Grand Valley Irrigation or Orchard Mesa Irrigation), or just the ones near your part of town, and express your desire that they open up their canal banks to public, non-motorized recreation. You can find all of the local irrigation companies’ contact information at irrigationprovidersgv.org.

In the mean time continue to note the longstanding presence of “No Trespassing” signage and act accordingly, but you also may want to practice walking, biking, skiing or running real fast.