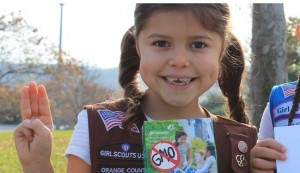 YOU GO GIRL! Seven year old Alicia Serratos is trying to get Girl Scouts to take the GMO ingredients out of their cookies

Seven year old Alicia Serratos of Orange County, California has been a Girl Scout for almost three years, so when Girl Scout cookie season rolled around, Alicia got excited about the prospect of selling cookies to help raise money for her troop. But then Alicia and her mom read the ingredients on the cookie box and she found she didn’t recognize a lot of them and couldn’t pronounce some of them, either. Since she was six, Alicia has spent time learning about genetically-modified organisms and their dangers, like infertility and tumors. She knew that over 60 countries have either banned GMOs or forced companies to list GMO ingredients on their labels. Alicia recognized some of the ingredients in Girl Scout cookies as GMOs. She got alarmed that she was being asked to sell cookies made with GMOs, and so she wrote to the Girl Scouts and asked them to take GMO ingredient out of their cookies. Alicia also made a YouTube video asking Girl Scouts to remove GMO ingredients from their cookies, and started a petition on Change.org asking Girl Scouts to stop putting GMO ingredients in their cookies. She made YouTube videos showing how to make healthier, non-GMO versions of Thin Mints and Melty Mints, to prove it can be done. Alicia also created her own cookbook, called “Recipes to Grow,” with over 40 recipes for food kids love, all made from organic and non-GMO ingredients. Alicia will be selling her cookbook instead of Girl Scout cookies this year. She plans to donate proceeds from the book to help schools establish organic gardens on their grounds. So far, over 18,800 people have signed Alicia’s petition, and she’s trying to get 25,000 signatures. For its part, Girl Scouts of the U.S.A. is resisting efforts to get GMOs out of their cookies and towing the GMO-biotech line. In a response to the growing uproar about GMOs in their cookies, Girls Scouts says, in part:

“It is important to note that there is worldwide scientific support for the safety of currently commercialized ingredients derived from genetically modified agricultural crops. The World Health Organization, the Food and Agriculture Organization of the United Nations, the U.S. National Academy of Sciences, and the American Medical Association all share this assessment. In addition, in the future, GMOs may offer a way to help feed an ever-increasing world population.”