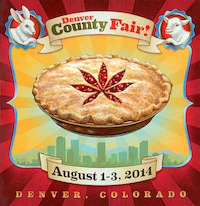 In November, 2012, by a vote of 55 to 44 percent, Colorado approved Amendment 64, which legalized recreational use of marijuana. As a result, Colorado is now hosting a booming new pot industry, and this year the Denver County Fair will include a new agricultural category: marijuana. Nine newly-added contests will include judging for highest quality pot plants (done on appearance, not on THC content, and through the submission of photos only), best marijuana-infused brownies and savory foods, best handmade bongs and roach clips, and clothing and fabrics made from hemp. There will also be a joint-rolling competition, done with oregano.

Denver County’s first fair was held in 2011, and with its new-age urban chic culture and little agriculture within its borders, it departs from the typical county fair in notable ways. One of these differences is it’s mission. The Denver County Fair bills itself as 21st century place to share ideas and creativity, celebrate diversity, local culture and intellect. (Yes, intellect at a county fair.) Besides marijuana judging, events include a best tattoo contest, a sopapilla toss, a speed texting competition, a human chicken contest, a Geek Pavilion, speed knitting, the “Corpses and Crowns” Zombie Beauty Pageant, trick pigs, pie on a stick, an X-Treme pancake breakfast with a choice of over 60 different toppings like artichokes and gummy worms. There’s even a drag queen contest.

The National Cannabis Industry Association recently reported that Colorado’s new recreational cannabis industry made “well over $5 million in sales in the first five days” of its operation in January, 2014. The financial boon for the state is leaving marijuana purveyors stuffing their mattresses full of cash, since banks refuse to deal with marijuana-related businesses out of concern that processing money from marijuana sales could put them at risk of incurring federal charges of drug racketeering, since marijuana remains illegal at the federal level.