Drilling rig outside the Ruggiero’s kitchen window. The Ruggieros were neighbors of the Parrs, who won the lawsuit against Aruba Petroleum, for damaging their health (Photo by Tim Ruggiero)

A Texas ranching family won a $2.95 million award in a civil lawsuit against Aruba Petroleum, Inc., after a jury found that the company’s drilling and fracking operations near their home caused the entire family to become desperately ill.

It is believed to be the first jury award in the country resulting from a claim of health damages from drilling and fracking operations. Most landowners who bring such suits are pushed to settle and submit to gag orders so drilling companies can keep the terms of the settlements out of the public realm.

Robert and Lisa Parr lived on a ranch about 40 miles northwest of Fort Worth, Texas, and had 20 active wells being drilled and fracked within two miles of their home.

In November, 2008, Lisa, a stay-at-home mom, started feeling nauseated and getting extreme headaches. At first she thought she was getting the flu, but the symptoms did not abate. She soon developed muscle spasms, a strange rash all over her body and open sores that would not heal. The sores and rashes got so severe that she went to the emergency room, where doctors packed her body in ice to give her some relief.

Lisa’s daughter, then about six years old, started getting severe nosebleeds in her sleep and would wake up soaked with blood.

The Parr’s neighbors, Tim and Christine Ruggiero, suffered similar problems and started taking notes and carefully documenting the drilling activities and how the drilling was affecting them and their property. They even took a prolific number of videos which they posted on YouTube, showing how close their home was to rigs. They documented incidents of tank venting, drilling emissions, open oily waste pits, decibel meters showing the noise levels near their home, and more. Tim and Christine Ruggiero have a website where they have posted the story of their problems with drilling and their battle against Aruba Petroleum.

The neighbors’ detailed documentation allowed Lisa to match the timeline of her doctor visits exactly to the timeline of of releases from Aruba’s gas wells on their property.

The Ruggieros  hired experts to come out of their house and test the air, and suggested the Parr’s do so as well.

The tests revealed benzene, toluene, ethylbenzene and xylene (BTEX) in the air in their homes — all toxic, colorless constituents of petroleum products.

Lisa took the test results to her doctor, who recommended the family move out of their house immediately, and warned that if they didn’t, they would “spend more time and money on hospitalizations, chemotherapy and a mortician.”

Plaintiff had constituents of petroleum in her bloodstream

In spring of 2010, Lisa consulted an environmental medical specialist who ran tests that revealed she had over 20 toxic chemicals in her blood.

Frightened for their lives, the Parrs moved out of their ranch house immediately and into a small room in the back of Robert Parr’s business office located about 30 miles away, in Denton, Texas.

In 2011, the Parrs sued the nine energy companies that were drilling around their home, and sought $66 million in damages. Over the duration of the suit, some of the companies settled and some were dropped from the action, but the Parrs insisted that, in addition to ruining their property value, emissions from the wells harmed their health. They eagerly sought a jury trial to prove their case. 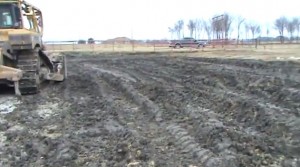 Drilling mud containing hydrocarbons and sewage spread on pasture by Aruba Petroleum, after a landowner wrote to Aruba’s president demanding the waste pit on his property be removed. They promised the landowner that the contents of the pit would be “hauled away.” They hauled it 200 feet. (Photo: YouTube)

Typically in lawsuits that have alleged health harm from fracking, companies have successfully argued that plaintiffs are unable to prove that their illnesses or injuries resulted from drilling operations, but over time, more studies have documented the impacts of drilling and fracking on health, so there is now a larger body of evidence indicating the link.

Aruba Petroleum, an oil and natural gas driller, claims it did nothing wrong and acted within legal guidelines and all applicable environmental regulations.

Their claim raises the question of how well such rules and regulations actually protect citizens, and to what extent acting within those legal guidelines will protect drilling companies from future similar legal action.

— Tim Ruggiero’s blog, Leaving Gasland, January 4, 2012, about his family’s travails with Aruba Petroleum and the state of Texas over the ruining of his family’s health and home