The most overlooked and historic story in Grand Junction this week is the area’s burgeoning gay scene and the growing prominence of the area’s lesbian, gay, bisexual and transgender (LGBT) population.

This year Gay Pride week brought an extended celebration of gender diversity to this formerly staid town, where previously people preferred to quietly sweep such culture under the rug.

Lest you think organizers had to go out of town to find such entertainers, that wasn’t the case. The show featured a performance by a home-grown, local drag troupe, The CDS Drag, with performers Jem Holiday, Donatella Mysecrets and Stella Rae.

Sunday, May 18 brought the Second Annual Gay Pride Parade and street festival. Heidi Hess, the western slope grassroots organizer for One Colorado, which works to secure and protect equality and opportunity for LGBT people and their families, reports that the size of the parade nearly tripled this year. 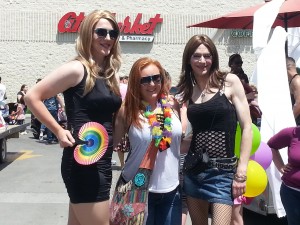 The parade and street fest were bigger and had more local business sponsors than last year, including US Bank, Modern Classic Motors and Budweiser.

A handful of local politicians joined the parade, all Democrats. All made it clear they appreciate diversity and are eager to have everyone’s vote.

Arguably of even greater cultural significance, two area churches joined in Sunday’s Pride Parade and Festival, embracing themes of unity, love and peace and announcing that they welcome everyone to participate fully in their congregations regardless of sexual orientation. The two churches are the First Congregational Church on 5th Street and Kennedy Ave., and the Community Spirit Church in Montrose.

The festival was held under the trees on the grassy lawn of the old Mesa County Courthouse at 6th Street and Rood Ave. and featured music, speakers, merchandise and food vendors, entertainers and political booths. A friendly female security guard sporting pink handcuffs checked the ID’s of people waiting to get into the beer garden.

All events were well-attended, well-coordinated, peaceful, fun, colorful and love-filled. 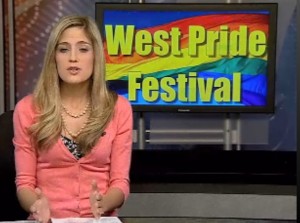 Grand Junction’s local media outlets seemed to grapple with how to best cover the week’s events.

Despite the significance of what clearly represents an ongoing cultural shift in Grand Junction, the Daily Sentinel saw fit to print only a single photo of the Gay Pride Parade, tacitly deeming it good enough — no story, no interviews, and no insights into this sizable emerging local community.

KKCO-TV 11 News (the station whose slogan is “Know More”) and KJCT-TV news — which are now basically clones of each other — both buried brief stories about the gay pride events deep in their 10:00 p.m. newscasts. After the broadcasts, no story — not a single word — about the parade or festival appeared on either of the stations’ websites. To it’s great credit, KREX-TV, the town’s only remaining independent TV station, covered the parade and festival, too, and even put a story about it on their website, but called it the “West Pride Festival,” conspicuously leaving out the “gay” descriptor. 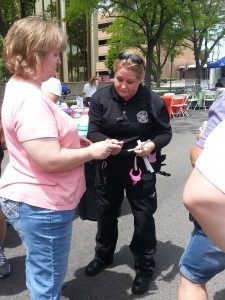 All indicators show a burgeoning gay scene is merging in Grand Junction, a place that has hardly been known for its cultural diversity.  If you’ve lived here awhile, it’s hard to think of G.J. as a place that embraces all manner of cultural diversity, but recent events this week indicate there’s a good chance that that just may finally be the case.