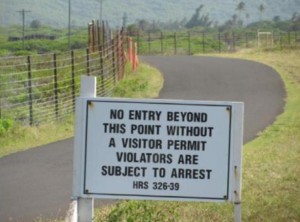 Because the whacked-out factions of the Mesa County Republican Party oppose it, just like they oppose most innovative ideas that could benefit our area economically.

Why do they oppose this cost-free way to boost the local economy and put Grand Junction on so many more maps?

Because Mesa County Republicans have an over-the-top, out-sized fear of any change in the local status quo.

Now the famous local party of “No, No, No” is working to generate widespread fear of upgrading the Colorado National Monument to a national park.

Give them credit for being inventive, anyway. And leave it to the local GOP to come up with some real doozies. 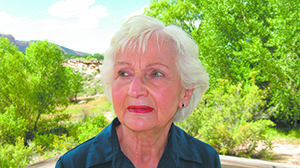 Ruth Ehlers, one of the petitioners

To gin up opposition to having a national park in our backyard, Sue Benjamin, publicity chairperson of the Mesa County Republican Women, and Ruth Elhers, former chair of the Mesa County Republican Party circulated a petition in front of the Redlands Safeway containing bogus, off-the-wall “information” about how national park status will change the ways people can use the monument.

“Those of you who exercise your dogs on the various paths will no longer be able to do that.”

Fact: Right now, dogs are not permitted on any trails in the Monument, only on paved roadways, overlooks and in the campground.

Another blatant lie Ehlers and Benjamin are spreading:

Truth: National parks, national monuments and all units of the national park system are subject to exactly the same federal regulations.

The petition contains still another lie about a “view shed,” which Benjamin and Ehlers define as

“When[ever] the Park service decides anything within the ‘view’ of the Monument should be part of the Park.”

“This includes the regulations of the air quality (smoke from burning off of irrigation ditches and fields would be offensive), light pollution (regulating the amount of candle power a city can display at night.”

The truth is the Park Service has nothing to do with making determinations about “adding anything to a view shed” to a park, nor does the it make any regulations about air quality, burning of ditches or light pollution. Air quality and visibility are managed under the authority of the state, and open burning is regulated locally.

It is clear that whoever wrote the petition lacks correct information, has taken little to no time to understand the functions of different levels of government, and has little understanding of local history.

These nutcase Republicans’ anti-national park Facebook page is titled “Friends of the Colorado National Monument,” and here’s a clue about the kind of people who created it: Whoever operates the page has “liked” the Facebook page of Nevada racist Cliven Bundy.

Just like the women behind the bogus Safeway petition, the people behind the “Friends” page also make fact-free, off-the-wall claims about the effects of changing to Monument to a national park:

They say turning the Monument into a national park will abolish private property. If the Monument becomes a national park, they warn, the U.S. Environmental Protection Agency or Department of the Interior will start to regulate the lakes and streams on Glade Park. (Many of them, by the way, are already on national forest land).

Operators of the “Friends” website also fret that national park status will draw a federal mandate to improve our area’s air quality and make sure we maintain beautiful views of the park. In reality, whether or not the Monument becomes a national park has no bearing on air quality requirements in our area. But for the sake of argument, let’s say they did. Why do these folks have such a fear of clean air? Hint: These are the same people who predicted economic doom when smoking was banned in bars restaurants in Colorado. Restaurants and bars would go out of business left and right, they warned, and our state would become an economic wasteland.

Of course that never happened, either.

This is the crazy mentality we’re dealing with in regard to the opposition to upgrading the Colorado National Monument to a national park. These are also the same people who run the local Republican Party, and who pick stellar candidates for office like “beat ’em up” Rick Brainard, plagiarist Scott McInnis and Janet “Beastiality” Rowland. They are irrational, uninformed and their statements are based on fear and wild innuendo, not facts.

In case you need to hear more, here are even more off-the-wall arguments from the “Friends of the Colorado National Monument” website:

–Cars and bikes will be banned if the Monument become a national park.

For good measure, they even contradict their own arguments. They say at once that it’s a lie that our area will draw more visitors if the Monument becomes a national park, but also that if it does become a park, roads through it will become overburdened with traffic and the park will suffer from overuse.

The Sky Is Falling!

The naysayers behind the anti-park propaganda websites predict nothing less than annihilation of Western Colorado if the Monument becomes a national park:

“One cannot minimize the negative impact national park status would have on our local lands, lifestyles, economy, and long-term viability should it be achieved. No national park or Class I [air quality] Area has ever been reversed. If proponents achieve their goal and win national park status, it will bring about devastating and irreversible changes to the very things that make Western Colorado a wonderful place to live.”

Haven’t we had enough of letting these nuts control what happens in our area? Haven’t we suffered enough under this idiocracy?