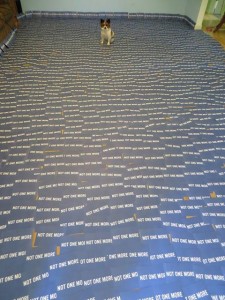 A portion of the postcards delivered to Congressman Scott Tipton on Friday, July 11, by members of the Grand Junction Gun Club .

A new citizens’ group in Grand Junction is saying “no more” to gun violence. The group came together to advocate action be taken to reduce the growing number of mass gun slaughters occurring in the U.S.

On Friday, July 11, 2014 the Grand Junction Gun Club presented Congressman Scott Tipton (R-CO) with 1,500 postcards from constituents in his district saying “Not One More” person should be killed by gun violence. 150 of the postcards were from residents of Grand Junction. The postcards were collected by Moms Demand Action for Gun Sense in America and Everytown for Gun Safety, two national groups working to overcome the inaction by Congress on the issue of  growing gun violence.

The words were inspired by Richard Martinez, whose son Christopher Martinez, was one of the six people killed in the May 23 gun massacre in Santa Barbara, California. In a statement to the media after his son’s death, Mr. Martinez said,

“When will this insanity stop? When will enough people say ‘Stop this madness!’ Too many people have died. We should say to ourselves, ‘NOT ONE MORE!'”

His words inspired a national movement to urge legislators to enact measures to reduce the number of guns getting into the hands of unstable and violent people. The Grand Junction Gun Club is standing in support of the survivors, families and communities throughout the U.S. that have been affected by mass shootings.

The perpetrator of the Santa Barbara shootings, Elliot Rodger, sought retribution against women for rejecting him and to punish young men whom he believed lived a better life than he did. Rodger visited a shooting range to train himself in shooting handguns and owned a Glock 34 pistol. When he finished his gun rampage, he committed suicide by shooting himself in the head.