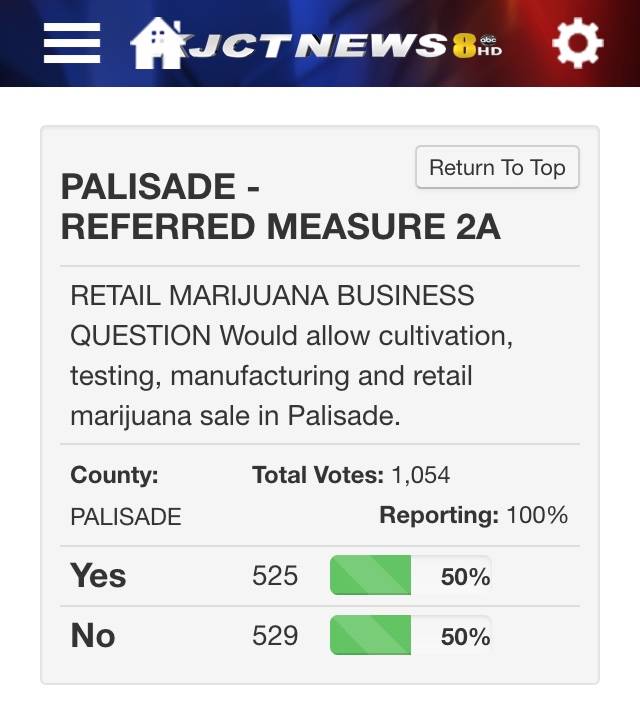 The Mesa County Clerk’s two goofs on the Palisade ballot right before the Nov. 4 election — both affecting only Palisade and the town’s two pot measures — appear to have helped keep recreational pot out of the Grand Valley for the time being.

It’s no secret that Mesa County’s Old Guard Establishment Republicans (OGREs) oppose legalized marijuana. Even though Colorado legalized marijuana in 2012, the Commissioners — all OGREs — exercised their option under the law to prohibit retail sale of pot throughout the unincorporated county, shutting off a new source of badly-needed new jobs and tourism, and blocking a desperately-needed economic boost to Mesa County’s long-suffering economy.

The OGREs’ only problem is that despite their best efforts, retail pot keeps creeping closer to Grand Junction, and there’s little they can do about it. Under state law, home-rule cities and towns can make their own rules regarding the sale and cultivation of pot, and last spring the town of DeBeque, 32 miles east of Grand Junction, approved retail pot shops by four votes.  Now DeBeque is poised to reap the benefits of being the first town on Interstate 70 inside Colorado’s western border to have retail recreational marijuana shops.

But retail recreational pot was about to creep even closer than that.

Palisade, just a few miles east of Grand Junction on I-70, was next on its way to approving retail pot. This summer, Palisade’s town council unanimously re-zoned land to allow the town’s one medicinal pot shop to start a growing operation in anticipation of selling recreational pot. Two pot-related measures were placed on Palisade’s November 4 ballot: one to approve the sale of recreational marijuana and the other to tax it. Palisade was well on its way to becoming the central Mesa County’s new recreational pot center.

There was only one line of defense left for the OGREs to keep retail pot out of the Grand Valley.

The mistakes appear to have done the trick to keep retail recreational marijuana out of the immediate area for just a little longer.