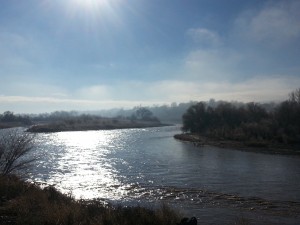 The morning sun glistens on the Colorado River on the Monument View section, where hunters are allowed to shoot in the same vicinity where people run, walk and bike by the river.

The Colorado Riverfront Trail is a huge asset to Mesa County citizens’ quality of life. It beckons residents and tourist to run, walk and bike amid the beautiful scenery alongside the river.

But frequently gunfire occurs around parts of the paths located outside City limits. Many times the sound of loud gunfire next to the path has reduced my dog to a quivering, drooling mass of fear. He digs in his toenails, shakes uncontrollably, refuses to walk any more and has to be lifted or dragged away from the area. The gunfire turns an otherwise pleasant, enjoyable time on the path into a nightmare for us and our dog, and cuts short the time we usually reserve for our morning walk. We have to drag the dog back to the car, leave the area and find somewhere else to walk where he — and we — don’t feel threatened.

So many of our riverfront walks have been ruined this way, I start to wonder why we ever go back. I have quietly wondered, too, if my dog is justified in being so frightened, and whether I should be a bit more concerned for my own safety.

Based on what I found out, I absolutely should.

On the Monument View section of trail, about 1/2 mile east of the Walker Wildlife parking area, there are two small, ominous signs — one facing in either direction — that say “Active Hunting Area. Please stay on trail and respect hunter’s rights.” But what, exactly, does this mean to people using the trail? The signs don’t say what to do if gunfire comes your way. They give no assurance you will not be hit by errant gunfire while on the trail. It doesn’t say where the hunters are or in what direction they shoot. It doesn’t give the dates of hunting seasons or point to protective barriers or cover.

No Protection for Trail Users

Ron Phelps, a supervisor with the City of Grand Junction Parks and Recreation department, says when it comes to firearms being used near the riverfront walking paths outside City limits, “Your dog is justified in being scared.” He adds, “It’s not a good idea to have shooting areas in the same places where people walk and bike.” Phelps added that people who use portions of the trail where hunting is permitted are, in fact, at risk of being struck by stray bullets, and there are absolutely no protections in place to assure it won’t happen.

Erin Serfoss of the Colorado Division of Parks and Wildlife says there is one hunting blind along the Riverfront Trail between 30 and 31 Roads, and an island in the middle of the river along the Monument View section, in the area of the United Gravel pits, that is private property where people can shoot at birds. The waterfowl hunting season runs from September 1 to mid-October, she says, and it opens again in November and runs until January, making many months of the year when guns can be shot off along parts of the trail that are popular with pedestrians and bicyclists.

When asked if any protections are in place to keep people using the paths safe from wayward gunfire, Serfoss answered plainly: “No, there’s nothing to keep it from happening.” If a bullet comes your way, she says, “You’ll just have to call the Mesa County Sheriff or Grand Junction Police Department.” She adds that people on the paths can only hope that whoever is shooting guns in the area has good judgement and uses safe practices with their firearms — but again, there are no guarantees.

There doesn’t appear to be any active hunter safety enforcement in the Riverfront Trail areas, and accidents with guns can and do happen all the time. Colorado was 20th in firearm mortality by state in 2012 (pdf). People using public walking paths in hunting areas in other parts of the country have taken gunfire. In January, 2012, a hunter accidentally shot a 66 year old woman who was out walking her dogs on a walking path in Massachusetts. He mistook one of her dogs for a deer and hit her. Fortunately, the woman was able to call 911 on her cell phone and get help.

Nationally, a person is more likely to die or be hospitalized for a firearm-related injury than any other injury, according to the Centers for Disease Control (pdf). Colorado Revised Statute 33-6-123 forbids hunting while under the influence of alcohol or controlled substances, but enforcement is never guaranteed and the penalty for violating the law is minimal — violators just get a court summons and 20 points against their hunting license. People on the other end of the guns, though, have far more at stake. They risk bodily injury, even their lives.

So walkers and bikers on the Colorado Riverfront Trail, beware. You can stay safe if you only use the sections of the Riverfront Trail  that are within City limits, because shooting is banned inside City limits. But the City limits are unmarked on the trail, so you still have to take your chances. Bulletproof vests cost between $150 and $900. Ballistic armor for your dog can run over $800. Another possibility is that we can assure everyone’s safety 100% by simply ending hunting where there are Riverfront Trail paths. It’s simply a dangerous and inappropriate dual use that’s asking for trouble.

The Colorado River is 1,450 miles long. Surely hunters can find other places to hunt along the river where they don’t endanger local citizens and dogs who are just trying to get some exercise and fresh air down by the river. After all, no one should have to risk their life to take a walk.