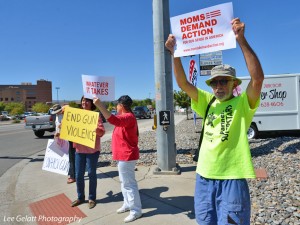 Grand Junction Gun Club members held signs and waved at noon today at 7th Street and Patterson Road to protest the escalating epidemic of gun violence in the U.S. and demand sensible gun regulations, like closing loopholes in the law requiring background checks for gun purchases. 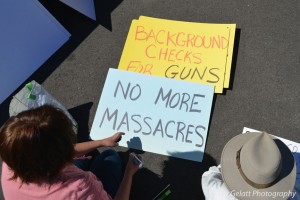 In Grand Junction, protesters stood on the busy corner in front of St. Mary’s Hospital in clear, sunny 80-degree weather holding signs saying “No More Massacres,” “End Gun Violence,” “Background Checks for Guns” and “Whatever it Takes.” The group got plenty of thumbs-ups and honks of approval from drivers passing by, as well as curious looks and even some middle fingers and angry shouts from drivers who didn’t support their efforts. 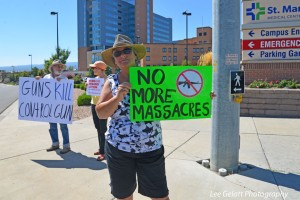 In the U.S., nearly 8 children are shot and killed every day, and Colorado has the dubious distinction of now being home to a growing list of notorious gun massacres: The Chuck-Cheese killings in 1993, the Columbine High School mass killing in 1999 and the Aurora Theater Massacre in 2012. And the legacy continues: at the same time protesters were holding their signs in Grand Junction today, yet another juvenile male was shot in Aurora, Colorado, resulting in three schools being locked down.

Have you had enough of gun violence in our country? Want to see the U.S. start doing something to reduce these now-common tragedies? To join the anti gun violence cause locally and get word of upcoming gun sense activities in Grand Junction, go to the Grand Junction Gun Club’s Facebook page.