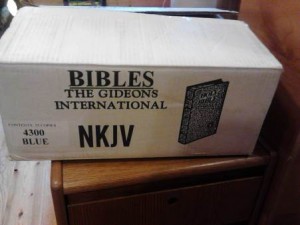 A box of Bibles from Gideons International

Students about to graduate from Colorado Mesa University’s RN/BSN nursing program are fighting a school-sponsored plan to hand out Gideon Bibles to nursing graduates after they step down from the dais at their pinning ceremony. The December 11 pinning ceremony is a symbolic welcoming of newly-graduated nurses into the nursing profession, and is the nursing students’ official, school-sponsored graduation ceremony.

Students Given No Choice

RN/BSN Nursing program administrators let students vote on many details of their own graduation ceremony, like the location and photographer, but made it clear to students that the Bible give-away was a non-negotiable part of the ceremony.

The Bibles are to be distributed by a local volunteer for Gideons International, a Christian evangelical organization that works to convert people to Christianity. According to their website, Gideons International is “dedicated to telling people about Jesus through sharing personally and by providing Bibles and New Testaments.” The Gideons are primarily known for putting Bibles in hotel and motel night stands, but they also distribute Bibles to elementary schools starting in the 5th grade, and to colleges, prisons, jails, hospitals and medical offices.

CMU nursing students who aren’t Christian and some who aren’t religious were appalled that they would be forced to either accept or reject a Christian Bible in front of the entire audience at their graduation ceremony. The students protested the Bible give-away to CMU president Tim Foster, but nursing program faculty attempted to ridicule the complaint and told students it is simply “what we do,” and they should just accept the Bible as a gift. 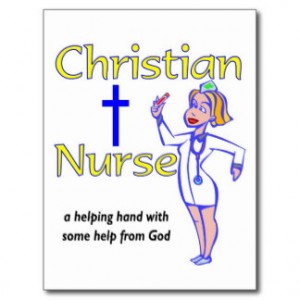 The disaffected students then contacted Western Colorado Atheists and Freethinkers (WCAF), a group that advocates for the separation of church and state. WCAF wrote a letter (pdf) to CMU President Foster and Diana Bailey, the head of CMU’s RN/BSN program, on the students’ behalf explaining that many students in CMU’s 2015 nursing class who aren’t Christians find the Bible give-away offensive and improper.  Under the law, WCAF said, the Gideons can give away Bibles, but only if they stand on city-owned sidewalk, well off school property, while they do it.

“It’s a blatant disregard of other peoples’ religion,” said one student, who wished to remain anonymous, to WCAF members. Another student wondered why just one religion would be represented at the ceremony. To be fair, the students said, CMU needs to distribute texts from other religions as well, like Books of Mormon, Korans and Talmuds.

The students have a point.

Public schools can’t do anything that gives the appearance of endorsing a single religion.

Publicly-funded institutions like CMU have to stay neutral in matters of religion, and cannot do anything a reasonable person might construe as an endorsement of a particular religion.

And that’s exactly how the nursing students see the Bible give-away: as an improper endorsement of one and only one religion: Christianity.

One thing that’s working in the nurses’ favor is Gideons’ own internal policy governing the distribution of Bibles in schools. Gideon International’s Form 115 policy on school scripture distribution (in Section 4-1, under “Reaching the Hearts of our Young People”) says,

“If any method of distribution [at a school] has the potential to create media publicity, the distribution must be cancelled or postponed.”

If CMU refuses to work with the nursing students to change or eliminate the Bible give-away, WCAF has vowed to contact the local media, protest at the pinning ceremony and, if necessary, contact the American Civil Liberties Union (ACLU) and the Freedom From Religion Foundation (FFRF) for legal help fighting it.