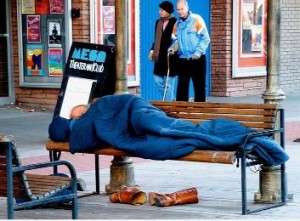 Recent news reports tell of the Mesa County Commissioners’ current struggle to deal with a $3 million budget deficit due to decreasing tax revenue. At the same time, Grand Junction City Councilors, citing a lack of tax revenue, turn down a chance to host the USA Pro Cycling Challenge, a potentially huge economic boon and an event that could draw favorable domestic and international media coverage for the city.

The economy remains bad and getting worse on other fronts in Mesa County, too. Last June, Mesa County saw its biggest jump in unemployment in 12 months, rising 6.6 percent in June alone. The lost jobs are attributed to low gas prices and continuing cutbacks in the oil and gas field, which has a long history locally of being an unreliable, employer locally.

At the same time that Mesa County’s economy is circling the drain, unemployment rates in the rest of the state are tumbling and, according to the Denver Post, have reached new lows not seen since the dot-com boom in the 1990s. Front range rents are high, vacancies are low and by all accounts other parts of the state are buzzing with new and growing economic activity.

So why is Mesa County languishing amid the state’s overall economic bonanza?

Things are bad here in large part because the Mesa County Commissioners and Grand Junction City Council are barring citizens in our area the ability to participate in the booming new marijuana economy.

KKCO 11 News broadcast a story on June 1, 2015 that said from January 1 through April 30th, the tiny town of DeBeque, with its population of just 503, collected over $43,000 from taxes on recreational marijuana from just the two licensed recreational pot shops they have so far in their town, only one of which had been opened for business by that time. In addition, the Town of DeBeque has gotten almost $10,000 in donations from Kush Gardens, one of the town’s recreational pot shops.

Palisade is pocketing $60,000-80,000 annually from it’s one medicinal marijuana store. The funds are derived from a sales tax and a $5-per-transaction fee.

These Mesa County jurisdictions can benefit from the new marijuana economy because they are incorporated towns, and as such can make their own rules about what they will accept within their own boundaries, even if pot sales are banned on the unincorporated county land surrounding them.

Elsewhere in the state, jurisdictions that permit retail marijuana grow and sales operations are thriving. 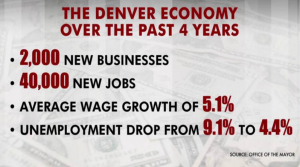 Denver’s economy has boomed from 2012-15, in the wake of legalized marijuana. Grand Valley citizens see none of it.

Front range hotels just had their best year in five years. Hoteliers attribute a significant part of their bonanza to pot tourism. In September, Denver-area hotels reported being almost completely full while charging their highest rates ever, around $130 per room, pumping higher revenues than ever into the pockets of hotel owners — almost a seven percent increase over this same time last year.

PR Newswire reported last April that since marijuana was legalized in Colorado in 2012, Denver has seen a spike in popularity among tourists and is now the 14th most popular domestic destination for Americans, according to Hotels.com. Other states that have legalized marijuana, like Washington and Oregon, are seeing similar spikes in tourism. 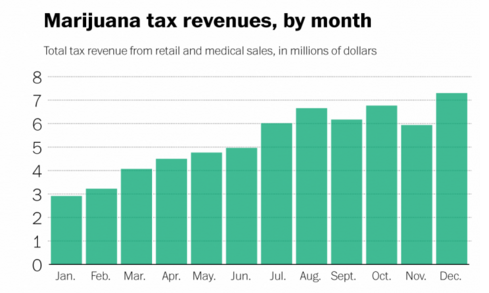 In July, TIME Magazine published a “Guide to Marijuana Tourism in America” that focused on the two states, Colorado and Washington, that have legal, licensed dispensaries that sell recreational marijuana. You can’t buy advertising like that.

New and unique pot tourism-related businesses are springing up all across the front range, creating jobs and income. They include things like “cannabis concierges,” “Bud and Breakfast” lodging establishments, dispensary-and-grow operation bus tours and even full weekend pot tourism excursions that draw $1,000 a pop and include transportation to and from the airport, a cannabis cooking class with a professional chef, two nights at a fancy hotel and a loan of a dry herb vaporizer to allow guests to more safely enjoy cannabis, and be able to legally enjoy it in a hotel room.

In the mean time, Mesa County’s economy languishes, and people here can only watch the rest of the state thrive as they lose out on the biggest new economic bonanza to hit the state in decades. Thousands of Mesa County residents continue to struggle with economic ills like homelessness, lack of adequate food and extremely low and stagnant wages. KKCO broadcast a special report November 15 on homelessness in the Grand Valley which cited homelessness even among hard-working employed people who aren’t paid anywhere near a living wage. Night after night, local western slope TV news shows are filled with reports of charity groups struggling to feed, clothe and house area families and individuals who remain locked in poverty, struggling to make ends meet — and who are often losing the battle.

When will the Mesa County Commissioners and Grand Junction City Councilors realize they can’t hold back the reality of marijuana legalization forever? When will they see the tremendous opportunity it has placed right at our feet, and approach it with creativity and optimistic, forward-thinking planning instead of abject fear?

Maybe never, unless local voters FINALLY choose to elect new, less fearful, more open-minded and progressive public officials. The same old mindset of the people we’ve elected to office for so long here have gotten the Grand Valley’s economy absolutely nowhere, and have even gotten our area in deeper trouble with problems like massive deficits, a county commissioner’s junket to Hawaii, airport investigations and huge severance payouts to failed and fired public employees.

Time for a change?

We certainly think so.