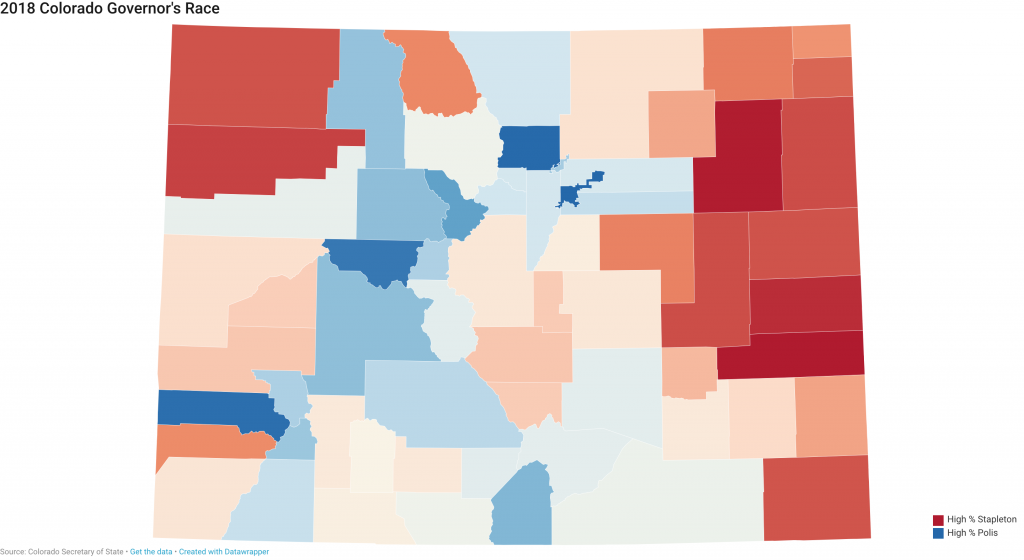 Map shows the results of the Colorado governor’s race by county, based on data from the CO Secretary of State

In Garfield County, adjacent to the northern border of Mesa County, the governor’s race was a dead tie between Jared Polis (D) and Walker Stapleton (R) at 48% to 48%. Pitkin, Gunnison, Ouray, San Miguel, San Juan, La Plata, Eagle and Summit Counties were all “blue” (went for Polis) in the governor’s race. There are only four hard-core “red” counties left on the western slope according to the map: Jackson, Moffatt, Rio Blanco and Dolores Counties.  Votes for Stapleton from all of those five counties together totaled only a relatively meager 8,086. It’s good to see things changing around here, albeit slowly.

As Grand Junction’s increased lodging tax takes effect, more money will be put towards marketing Grand Junction and it’s surrounding areas. More and more people from liberal areas will start noticing our area, moving here, and bringing their businesses here, and along with them more diverse political and religious viewpoints and more open minds. One business, Rocky Mounts, has already relocated to Grand Junction from Boulder, bringing about half it’s employees along with it. It also helps draw the right kind of attention to the western slope when the Grand Junction Economic Partnership promotes Grand Junction as “Boulder 30 years ago.”

So not only is Colorado once again solidly “blue” politically after the election, but thanks to the additional tourism tax we just voted in, we can expect the “blue-ification” of Mesa County to continue, and that’s welcome news for the growing and increasingly active progressive political left in our area.

8 comments for “The Blue-ing of the Western Slope”